Hydrogen battery electric truck start-up Nikola has this morning announced the resignation of founder Trevor Milton as executive chairman. Nikola, which hopes to rival Tesla as a maker of zero emissions freight vehicles, has been embroiled in accusations of fraud after a damning report was published earlier this month by short sellers Hindenburg Research.

The key accusation of the alleged “intricate fraud”, is that Nikola’s ‘proprietary technology’, was in fact acquired from another company. Nikola strenuously denies the claims, which have provoked an SEC investigation, as “false and misleading”. But despit that, Mr Milton has fallen on his sword, releasing the statement:

“Nikola is truly in my blood and always will be, and the focus should be on the company and its world-changing mission, not me. So I made the difficult decision to approach the board and volunteer to step aside as executive chairman.”

Mr Milton will be replaced as executive chairman by board member Stephen Girsky, who is a former vice-chairman of General Motors. Nikola’s share price has more than halved from June highs since Hindenburg Research published its report. 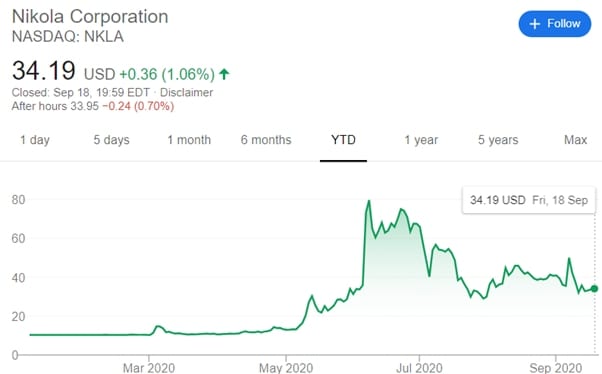 It’s all a far cry from the bombast of June, when Nikola listed on the Nasdaq exchange at a valuation of £15.4 billion, despite never having produced a vehicle. At the time, 38-year-old Milton, a flamboyant university drop-out claimed he was one of just a few people in the world who could “out-Elon”, Tesla boss and rival Elon Musk. With Mr Musk notorious for pushing the boundaries of reality with his promises and ambitions, Mr Milton may have proven himself right. But not in a good way. Despite controversy, Mr Musk has never been accused of the kind of outright fraud Mr Milton now is.

At the time of the listing, which made Mr Milton an overnight billionaire, he claimed Nikola was making quick progress towards its aim to “exit diesel trucks from the world”. He went as far as to state rival Tesla was “just really following in our footsteps”.

Despite Nikola’s insistence the Hindenburg charges are an attempt to manipulate its stock price to the short seller’s own benefit, investors are far from convinced this particular smoke plume doesn’t track back to a sizeable bonfire.

Nikola is not Mr Milton’s first experience in sustainable transport technology. After setting up and selling a home security company after he dropped out of university, he co-founded dHybrid. The company, whose other co-founder contributed the technology, offered a way to convert diesel engines to run on natural has. Mr Milton’s role was as the company’s promoter and deal closer.

He convinced trucking company Swift to invest $2 million and sign up to a deal to convert 800 of its lorries. In 2012 Swift sued dHybrid, claiming the technology was faulty and only five of its trucks had been converted. Milton secured a deal to sell dHybrid but it collapsed amid litigation the company had lied about its technology.

Milton then set up the almost identically-named dHybrid Systems with his father and managed to bring in heavy manufacturer Worthington as an investor. The company paid $16 million in 2014 for an 80% stake. That pay-day funded the founding of Nikola.

Almost immediately, the start-up claimed to have developed working prototype of a hydrogen fuel-cell lorry. A technological advance the giant automakers of Detroit had failed to achieve in decades of trying. Milton said “this thing fully functions and works”.

German auto parts giant Bosch invested. Three years later, this summer, Bloomberg reported the prototype had in fact not worked and been missing key components, which crucially included hydrogen fuel cells. Milton admitted as much but claimed he had never said the prototype had fuel cells fitted. The company said last week it had said the protype had been filmed “in motion”, and not “under its own propulsion”.

Nikola said investors who put money into the company were aware of what the prototype could and couldn’t do at its stage of development when they chose to invest. Hindenburg said Nikola’s responses to questions put to it, many of which were ignored, were tantamount to “a tacit admission of securities fraud”.

Mr Girsky will have his work cut out in salvaging something from the mess. His chances of success hinge on a tie-up with GM, which is set to close on September 30th but was agreed before Hindenburg dropped its bomb. Keeping GM onboard may well make or break Nikola’s future.