The Deliveroo share price gained as much as 10% in early trading today after an announcement by Delivery Hero has built a 5.1% stake. The German company, which operates across over 40 countries and owns food delivery app brands including FoodPanda and Foodora, is a direct rival to Deliveroo on a number of European markets.

Today’s share price gains go some way towards reclaiming the 30% drop in the company’s valuation over its first day trading on the London Stock Exchange. Deliveroo has now gained 21% since that opening day tumble but its current market capitalisation of £6.24 billion is still well off its IPO valuation of £7.6 billion. 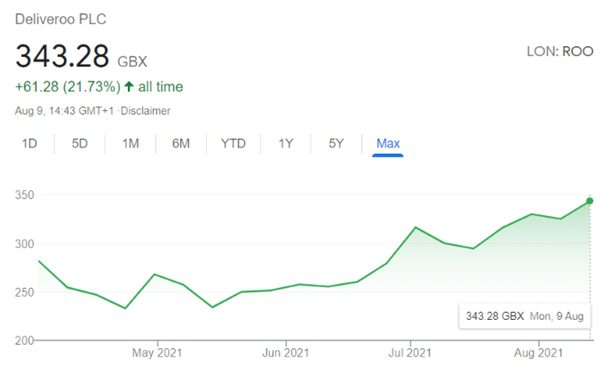 However, the Deliveroo share price has now gained 47.85% since a low set in early April, and almost revisited in mid-May. The initial sell off was put down to a combination of concerns over the sustainability of its business model, challenges to the legal status of drivers, and a dual share structure that gives co-founders Will Shu and his friend Greg Orlowski majority voting power despite now holding minority stakes.

The recent recovery in the company’s valuation has been boosted by it winning a drawn-out legal fight for its delivery riders to be considered self-employed and not employees. A strong second quarter that benefitted from the European Championships held between June 11 and July 11 also helped prop up investor confidence.

Full year guidance on revenues has also been raised after fears the reopening of pubs and restaurants would lead to a drop in orders for home deliveries of takeaway meals have so far proved unfounded.

That, and the fact the share price is still significantly down on its IPO level of 390p even with today’s gains, appears to have attracted Delivery Hero, which hasn’t had a presence in the UK since selling its Hungryhouse business to Just Eat Takeaway.com in early 2018.

Delivery Hero acquired its 5.1% stake in Deliveroo on Friday for an estimated purchase price of about £284 million. Today’s gains mean that the stake is already worth £312 million – a £28 million paper profit over a single weekend.

Deliveroo operates in 12 countries but, as revealed last month, will scale that back to 11 after it closes down its under-performing Spanish business.

Delivery Hero has a tradition of acquiring minority stakes in peers and also holds positions in Just Eat Takeaway.com, Spain’s Glovo and Rappi, which operates in Latin America. The Just Eat Takeaway.com stake, 7.4% of the company, was initially a legacy of selling its German business to the Anglo-Dutch company. The deal was partly paid for in new shares issued by Just Eat (before it combined with Dutch company Takeaway.com) and Delivery Hero has since added to that original stake.

With Delivery Hero remaining a passive investor in the peers it holds minority stakes in, as well as Deliveroo’s dual-class share structure meaning a hostile takeover is impossible, it would seem unlikely the Berlin-based company has any plans to launch a takeover bid. There is also very little direct competition between the two companies, except for some cross-over in parts of the Middle East and Asia.

On announcing its investment to the stock market this morning, Delivery Hero released the statement:

“Delivery Hero is always looking for new investment opportunities. We strongly believe in the future potential of the delivery industry as a whole, and therefore decided to purchase shares in one of the companies that is at its forefront.”

Deliveroo, which will officially report its half-year results this Wednesday, has reportedly called the move by its German peer as “an endorsement of our business”.