The Deliveroo share price has gained almost 4% today after the food delivery app’s co-founder and chief executive William Shu assured investors moving into profit was “a key focus for the food delivery group this year and beyond”. He went on to outline “a longer-term path to profitability” he said should see the start-up move into the black “at some point” between the second half of 2023 and the first half of 2024.

Today’s share price gain will come as a welcome relief for investors who have seen the company’s share price slide by 58% since it listed just under a year ago. Deliveroo also announced its 2021 full-year results today which were described as “a mixed bag”. While revenues met analyst expectations, gross profit figures fell below forecasts and 2022 guidance failed to excite. 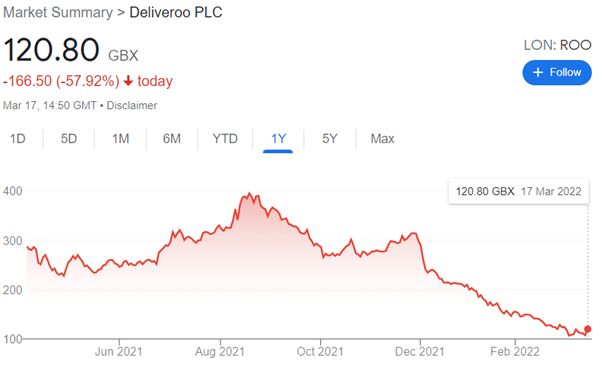 Shu, however, was at pains to insist that the figures presented represented “good progress in executing its strategy during our first year as a public company”, with the chief executive going as far as stating he was “proud of our performance.”

Shareholders may not be quite as convinced with the company’s post-IPO performance. Deliveroo’s share price plunge by 30% in early trading on its first day as a public company and has struggled ever since despite being hailed by Chancellor Rishi Sunak as “a true British tech success story.”

Deliveroo has since been regularly referred to as both an example of a bad IPO and why London is not a good capital market for high growth, loss-making tech companies, in contrast to Wall Street.

Deliveroo’s share were sold for 390p during its IPO and currently trade at 120.8p, a drop of almost 70%. The company also has a controversial dual share structure which means Shu retains majority voting rights for another two years.

Last August the company’s share price briefly returned to its level at issue after a strong trading report and victory in a legal dispute over the status of its delivery riders. German peer Delivery Hero also acquired a 5.1% stake in the company at 270p-a-share to boost optimism. However, by the beginning of this month, the Deliveroo share price had set a new record low of 101p.

The share price rose by as much as 8.5% today after Shu outlined the company’s path towards profitability before losing a little over half of those gains by mid-afternoon. Shu told investors he expects Deliveroo to be operating at an adjusted earnings margin of at least 4% “with further upside beyond” by 2026.

Founded in 2013 by Shu and Greg Orlowski, Deliveroo currently works with 117,000 restaurants across 12 countries and employs 100,000 delivery riders on a “gig economy” basis.

Revenues grew by 57% to £1.82 billion over 2021 to the end of December but pre-tax losses increased to £298 million from £213 million in 2020. A strong number was gross transaction value which improved 70% to £6.63 billion thanks to second-half growth of 46%. However, that didn’t prevent underlying losses increasing to £131 million from £11 million as a result of higher marketing spend and investment in technology.

Shu admitted that the company faced challenges as a result of current inflationary pressures and the removal of economic stimulus at the end of the Covid-19 pandemic and concluded:

“We will continue to monitor developments closely. Our 2022 guidance reflects our caution on these factors, but we are confident in our ability to adapt financially to a rapidly changing macroeconomic environment.”