Takeaway delivery app business Deliveroo has started to fight back from the IPO flop that saw its share price slump 30% over its first morning as a public company. Concerns the tech company’s revenues would suffer as restaurants and pubs reopened have so far proven unfounded, boosted by the ongoing European Championships football tournament which England have reached the final of.

Higher revenues than anticipated over the past few weeks mean Deliveroo now expects its gross transaction value (GTV) to see growth of between 50% and 60% for the year. The previous forecast had been for between 30% and 40%.

Having dropped to an April low of 228p from the IPO issue price of 390p, the Deliveroo share price has since recovered to 313.25p despite a 2.3% slide yesterday. That is still almost 20% down on the issue price but a significant improvement on the delivery app’s early days as a public company and a step in the right direction. 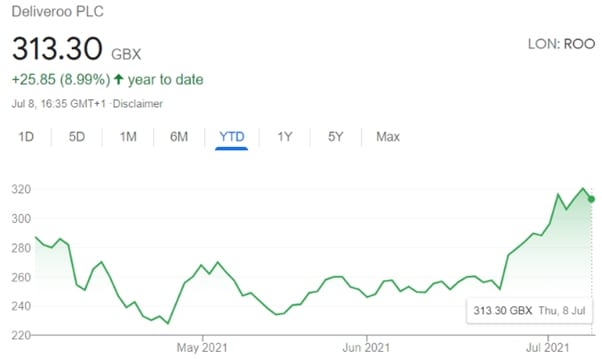 Deliveroo employs around 100,000 delivery riders, their bright kangaroo-emblazoned backpacks a regular sight as they cycle around dropping off orders across towns and cities in 12 countries.

The Deliveroo share price has recently benefited from successes in the company’s ongoing legal wrangle for its riders to be recognised as self-employed. The risk delivery riders would be legally classified as employees and be entitled to benefits like a minimum wage, sick leave and paid holidays has been one of the biggest factors to drag on Deliveroo’s post-IPO share price.

And business is also good with GTV growth hitting 76% to £1.74 billion over the second quarter. That figure was even higher in the UK and Ireland, reaching 87%. The international business saw 65% GTV growth.

Order numbers were up an impressive 94% in the UK and Ireland to total 78 million with 40 million orders delivered internationally, representing 83% growth. Total GTV for the year is now expected to reach between £6.1 billion and £6.5 billion.

The company will, however, see its costs increase significantly as it announced this week it would be creating 400 jobs over the next year in technology roles like software engineers and data scientists. It said yesterday that decision was based on seeing a second half of the year “opportunity to make further discretionary investments into growth opportunities”.

There will also be investment made into extending the new grocery deliveries business, Morrisons uses Deliveroo as its partner for online groceries orders, and new customer incentives and trials of a subscription service.

However, the company did warn investors it expects average order values to drop back to their pre-pandemic levels which it forecast to mean gross profit margins will fall within the bottom half of its existing forward guidance range for between 7.5% and 8%.

Analysts reacted positively to the unscheduled update with Numis publishing a research note that read:

“This is an encouraging trading update from Deliveroo, building credibility following a weak start on public markets. We continue to see Deliveroo as our play in the food delivery sector, given its hyper-local approach to delivering the best consumer experience underpinning long-term market share gains.”