If there was any remaining doubt that the streaming business model pioneered by Netflix is the future of the film and television industry, Disney has put that to bed by reorganising the company to focus on streaming. Walt Disney is one of the oldest film makers in the world, and has of course since expanded into a huge mass media and entertainment conglomerate.

But despite interests that span from the licensing of branded Disney merchandise to theme parks, it is still film that is the business’s core. Without films to popularise the Disney stable of characters and franchises, which also include Marvel, Star Wars and Pixar heroes, there would be no theme parks, merchandising and television spin-offs.

But it seems that big cinema releases are no longer viewed by Disney as the most important element to the future of its film making and the money-making machine that then capitalises on their success. The company yesterday told share holders it is reorganising to focus most attention on creating original film and television for its streaming services. And investors seem to agree with the move, sending the Disney share price up over 6% in afterhours trading yesterday. 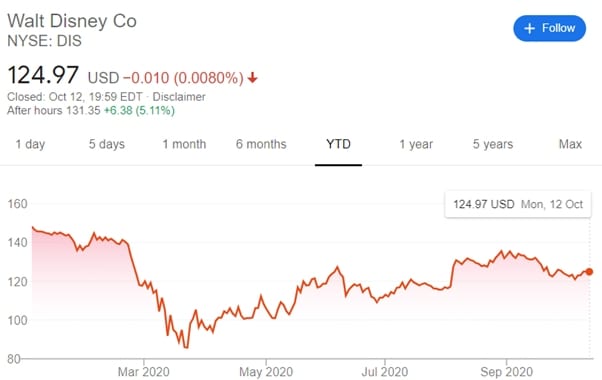 The reorganisation is more about where the film franchises, general entertainment and sports content production will be aired, with the groups producing the content remaining as they are now. But a new single distribution arm to be led by Kareem Daniel will decide where shows and films will air. It is here that the new focus will be Disney’s own streaming services.

Activist investor Daniel Loeb, who has been calling on Disney to invest more in producing high quality, exclusive content for its streaming service, will approve. Last week he called for Disney to accept the move away from cinemas accelerated by the Covid-19 pandemic and to focus its flagship content on a streaming-based business model. He went as far as to say that Disney’s annual dividend of around $3 billion should be temporarily re-budgeted and put towards investing in streaming content.

The move makes sense both in the context of the long term view and the fact that the company’s new Disney+ streaming service has been its only unit to perform well this year. Blockbuster films produced for cinema release, Disney theme parks and cruise ships have all seen their revenue generating capacity devastated by the coronavirus pandemic. Disney+ might still be lossmaking but it is growing quickly and attracted over 60 million subscribers in less than a year.

Disney chief executive Bob Chapek told investors that splitting the company’s production and distribution arms would “allow us to be more effective and nimble in making the content consumers want most, delivered in the way they prefer to consume it”, ultimately increasing shareholder value.

GameStop, the video games retailer that has this year found itself at the centre... END_OF_DOCUMENT_TOKEN_TO_BE_REPLACED

Investors in the online fashion retailer Asos may well be hoping the company’s share... END_OF_DOCUMENT_TOKEN_TO_BE_REPLACED

In another indication that it will take more than a tweaking of the City’s... END_OF_DOCUMENT_TOKEN_TO_BE_REPLACED