Netflix will be looking over its shoulder after Disney officially entered the fray of ‘the streaming wars’ with the launch of Disney+. The subscription-based content streaming platform costs a modest $6.99 a month, or $69.99 for an annual subscription, and offers the entire Disney back catalogue of films and TV shows. Several exclusive new shows have also been developed for the launch of the service, including Star Wars spin-off The Mandalorian. Disney bought the rights to the hugely popular Star Wars franchise as part of its 2012 deal to acquire Lucasfilm for $4.05 billion.

The combination of the Disney back catalogue and exclusive new shows like The Mandalorian appears to be working. A total of 10 million subscribers were enticed over just the first two days of the Tuesday Disney+ launch. The USA, Canada and the Netherlands are the first three countries in which Disney+ is available. The platform won’t, however, be available in the UK until March 31st next year.

The early subscriber numbers attracted represent a very good start in Disney’s pursuit of a target of between 60 million and 90 million subscribers globally by 2024. Netflix, which has been building its subscriber base for around a decade already has 60 million subscribers in the USA and 158 million internationally. The early 10 million sign-ups smashed the forecasts of Wall Street analysts, who had expected between 3.5 million and 5 million. The result has given a sharp boost to the Disney share price, which was yesterday up 7.3% to a new all-time high of $148.72. Over the past 10 years since a $16.77 low in early 2009, the company’s share price is up over 130%. 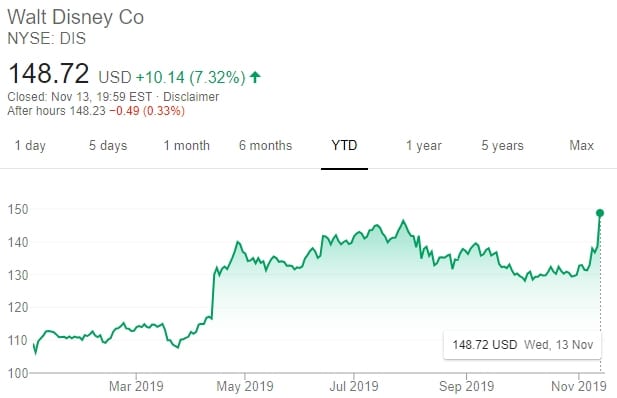 However, investors will be keen to understand how many of the 10 million new Disney+ subscribers are paying customers and how many were attracted through promotions such as a joint promotion with U.S. mobile operator Verizon offering the first year free. Those figures should become clearer at Disney’s next quarterly results report, if the company doesn’t choose to update markets sooners.

Disney enters the streaming market at a time when the sector is entering a new phase of both growth and heightened competition. Apple also recently launched its own Apple TV+ streaming service, which also features expensively produced exclusive content and star names including Oprah Winfrey and Jennifer Aniston.

The Disney+ launch hasn’t, however, gone without any hitches. Potential and new subscribers reportedly had difficulty finding the new Disney+ app in the App Store and for some there were reportedly difficulties in connecting to the service with error messages appearing. The initial launch was also supposed to include Puerto Rico but that has been put back for another few weeks with no real explanation given.

However, despite a level of grumbling in some quarters, Disney will undoubtedly be happy with the early traction the new service has achieved. And in the UK fans of Star Wars, the Marvel franchise and Disney’s childhood classics will be impatiently waiting for the end of March 2020 to see for themselves.