The Disney share price has gained a little under 5% this week thanks to a 3.4% boost after the company beat analyst expectations for its most recent quarter. The Walt Disney Company’s total revenues for the three months to July 3 were up 45% compared to the same quarter a year earlier and totalled $17.02 billion.

Income was boosted by an impressive performance from the new Disney+ streaming service as well as the company’s resorts, which were back in business after being mothballed for periods over the coronavirus crisis. The revenues generated by Disney’s parks, experiences and products business rose by almost 400%. 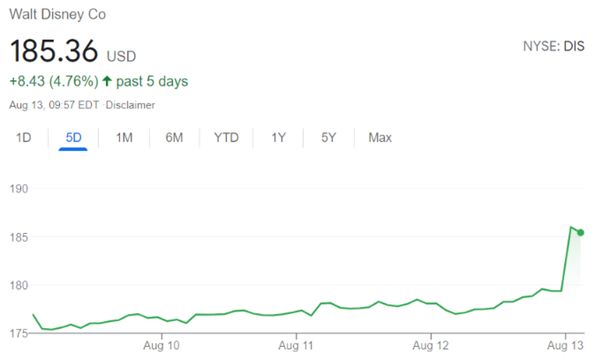 That helped the company book a net income of $995 million of the quarter compared to the huge $4.84 billion loss over the same period a year earlier.

In less than two years since it was launched, the Disney+ streaming service has grown its paying subscriber base to an impressive 116 million. And it should still have plenty of headway in its fast growth phase with plenty of new territories still left to move into. New shows like Loki, a new action series added to Disney’s Marvel stable, and Star Wars spin-off The Mandalorian have been a hit, as well as the attraction of on-demand access to the Disney back catalogue.

With a market capitalisation of around $320 billion, Disney’s media and entertainment empire stretches back almost a hundred years and now spans film studios, broadcast media, streaming, resorts and lucrative licensing deals with the manufacturers of Disney-branded products.

Revenues were up across Disney’s businesses with 18% growth to $12.68 billion for the media and entertainment distribution division and parks, experiences and products bringing in $4.34 billion compared to just $1.07 billion over the same quarter in 2020. The direct-to-consumer business, which includes Disney+, direct Neflix-rival Hulu and the ESPN+ sports platform saw revenues rise by 57% to $4.3 billion. Revenues were up across all the platforms but dominated by Disney+.

“We ended the third quarter in a strong position and are pleased with the company’s trajectory as we grow our businesses amidst the ongoing challenges of the pandemic.”