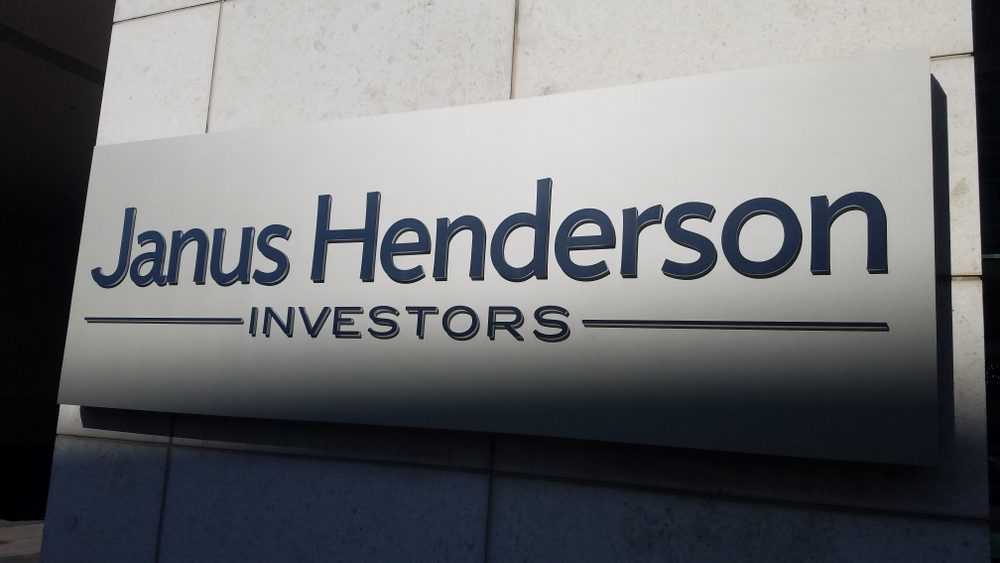 2020 was a disaster for income investors as the onset of the coronavirus crisis saw companies batten down the hatches by either cutting completely or substantially reducing dividend payments. The Janus Henderson Global Dividend Index shows the pandemic resulted in $220 billion of dividend cuts last year with total global payments falling to $1.26 trillion – a headline 12.2% drop on 2019. Other metrics put the global drop in 2020 dividends at 20%.

Between the second and fourth quarters of last year one company in eight scrapped its dividend altogether while one in five reduced it. The worst hit sectors were banks, oil, mining and consumer discretionary, while classic defensives – food retail, pharmaceuticals and personal products – were well insulated.

Unfortunately, that meant dividends paid out by companies on the London Stock Exchange were disproportionately affected. Many of the most consistent, and best, dividend payers among London-listed companies are from exactly the most affected sectors like banking, oil and gas and mining.

Another factor was that London-listed companies typically pay out a lot more dividends than those on other major international exchanges. That intensified the impact of the pandemic on dividends compared to elsewhere. According to FT data, the historic dividend yield at the end of 2019 was 4.4% for the UK, 1.9% for the USA and 2.3%for Japan. 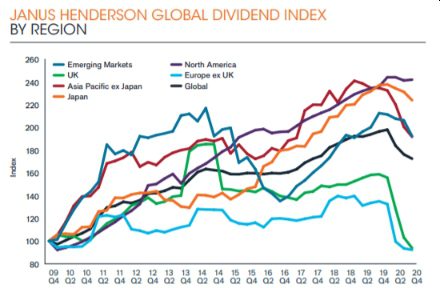 In the third quarter last year, UK dividend payments were down a whole 49% on the same three months of 2019. It was the poorest third quarter for payouts since 2010, in the wake of the international financial crisis. Two thirds of London-listed companies either cut or reduced their dividend payments, depriving shareholders of £14.5 billion.

The second quarter had been even worse with three-quarters of London-listed companies cutting dividend payments. A third of the cuts were involuntary and a result of the UK’s banking regulator essentially banning banks from paying out dividends because it wanted them heavily insulated against any balance sheet stress that might result from the pandemic. A repeat of the 2008-09 need for government bailouts to prop up the banking sector was to be avoided at all costs. 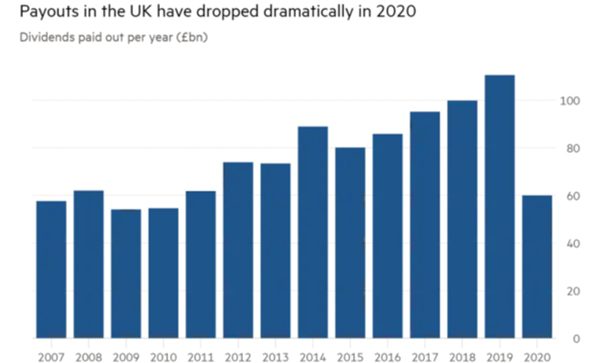 In the event, the no-dividends mandate proved over cautious and it looks like whatever the final extent of the pandemic on underlying economies proves to be it will not involve any major instability in the banking sector. But that means banks now have excess cash they were obliged to hold last year as an additional moat against shocks. And they are now starting to return it to shareholders.

Energy and mining companies, also traditionally among the best and most consistent dividend payers among London-listed companies, have also quickly swung from bust to boom. Oil and gas prices plunged last spring as the world ground to a relative halt, severely reducing demand. Demand for industrial commodities like metals also plunged.

The return of UK dividends

But at the halfway point of 2021, dividends are back. This month the Prudential Regulation Authority, the Bank of England’s banking sector regulator, gave London-listed banks the green light to recommence paying shareholders dividends.

Last week Barclays Barclays smashed City forecasts by quadrupling first-half profits to £5 billion after reporting a “resurgence” of activity across its businesses and a benign credit environment. Britain’s third-biggest bank reinstated an interim dividend at 2p and announced another £500 million buyback programme.

Lloyds also announced the Prudential decision meant it would release £656 million of funds it had been holding as an extra buffer to pay shareholders a 0.67p-a-share dividend. Even NatWest, still majority-owned by the taxpayer after its 2008 bailout as the Royal Bank of Scotland Group, is to pay out almost £3 billion to shareholders this year after bouncing back into profit. The bank said yesterday it would purchase up to £750 million of its own shares this year and pay a 3p-a-share interim dividend, worth up to £347 million.

NatWest’s improved performance encouraged it to pledge to return at least £1 billion a year to investors for the next three years, up from the £800 million promise it announced in February.

The dividends bounce-back has been even more pronounced in the energy, mining and commodities sector. This week Royal Dutch Shell raised its dividend and launched $2 billion in share buybacks after oil prices rebounded sharply with Brent crude more than doubling in price from a year earlier. That returned the group to profit, and a good one at that. Stripping out such write-downs and other one-off charges, Shell’s adjusted earnings soared to $5.5 billion, almost nine times higher than the $638 million it reported a year earlier, and ahead of the $5.1 billion analysts had forecast.

The diversified mining group Rio Tinto announced it will pay out record half-year dividends totalling $9.1 billion, sending its share price to new record highs. The miner will make the payment via a $6.1 billion ordinary dividend topped up by a $3 billion special dividend. The miner’s revenues have surged thanks to iron ore prices topping $200 a tonne in recent months as well as a strong market for other industrial metals like copper.

Anglo American, another miner, is to return $4.1 billion to shareholders after surging commodity prices helped the miner to deliver record half-year profits.

The FTSE 100 group reported net profits of $5.2 billion, eleven times higher than the $471 million it posted in the first half of 2020. It announced a $2.1 billion ordinary dividend and said a further $2 billion of “excess cash” would be returned to shareholders in the form of a $1 billion special dividend and a $1 billion share buyback.

Investors who cut their losses on income stocks last year or are keen to add more income to their portfolios still look like they have time to take advantage. Despite London’s return to dividend form this year the UK market is lagging international peers.

Globally, analysts expect dividend payments to recover to pre-Covid levels as early as this year. Despite second quarter payments up 50% on the same period last year and third quarter payments on track to comfortably beat that, they remain a sixth below pre-pandemic levels. And they aren’t expected to fully recover until 2025.

“The big UK stalwarts are not playing catch-up on dividends, whereas in some countries we are seeing that.”

However, that may not be bad news for investors as many believe some UK companies were meeting heightened investor expectations for dividends at the expense of investing in their future growth. Some, like energy majors Shell and BP, had the practical need to invest more in their switch from oil and gas to renewable energy and being able to reset dividend expectations will help.

But the willingness for most companies to reinstate dividends as quickly as possible indicates the pandemic has not caused a major culture shift and shareholder payouts remain a priority. In fact, despite overall payouts still being down, yields are up due to still subdued share prices.

Online investment platform AJ Bell calculate that total FTSE100 payments would grow by 25%  this year to £67.9billion. Despite still being a drop from the £85.2billion in 2018, that would give a yield of 3.7%, with cover increasing to 1.83 times earnings – the highest since 2014.

With a current yield of 3.7%, a FTSE 100 tracker currently represents a pretty decent income yield in the context of 0.1% interest rates. For those willing to take a risk on individual stocks in the pursuit of dividend income it could be possible to do even better if things go well.

She also picks out the UK-listed Alliance Trust, explaining why she thinks it is an income investment worth considering with:

“It gives low-cost access to genuinely active management through the concentrated portfolios of ten excellent equity managers, most of whom UK investors would not have access to independently. The dividend yield is not super-high at the moment (1.4%) but it has risen every year for the last 54 years and Investec points out that the board is in the process of ‘reviewing the level and funding of the dividend to assess if a more attractive and sustainable level of distributions may be provided’. I suspect that it can.”

The Motley Fool also picks out three dividend stocks it thinks are worth investors’ attention in August. Its ideas are:

Multi-commodity miner Anglo American offers a combination of a 7% yield from dividends and a shre price that is also climbing, offering both income and growth potential. Many mining sector analysts are optimistic over Anglo American’s prospects over the next few years. Returning consumer spending should boost diamond prices, which it is a major producer of and major infrastructure projects in especially the USA and China should keep industrial metal prices high.

Rising oil prices saw Shell’s net profits grow 150% over the first half of 2021 compared to a year earlier and they are expected to hold at around current levels for some time as more normal levels of travel return. Despite increasing its dividend again last week the yield, at 3.3%, is still half of what it was before the pandemic.

That means there should be plenty left to come, even if dividends don’t return to pre-Covid levels due to investment in the needed shift to renewable energies. But if oil prices and profits remain high, the traditional big dividends payer will be tempted to return more to shareholders than it may have thought it would be able to.

Not everyone will be keen to invest in a big tobacco stock, but setting aside investment philosophy, on paper it looks like an attractive income stock. The current dividend yield is huge at 7.9% and a share price that has been trending down for some time looks like it has now stabilised.

The tobacco industry has a very uncertain long term future but will still be highly profitable for a number of years to come. And BAT has an opportunity to substantially grow its still small tobacco alternatives business. The gradual but consistent trend of cannabis being legalised around the world is also a new, potentially hugely valuable, market big tobacco is expected to pivot towards over coming years.

A little over a week into 2022 we’ve already experienced some major market movements.... END_OF_DOCUMENT_TOKEN_TO_BE_REPLACED

One of the FTSE 100’s current disadvantages, when it has come to attracting international... END_OF_DOCUMENT_TOKEN_TO_BE_REPLACED

Did you know you could build wealth by investing in Lego? A study suggests... END_OF_DOCUMENT_TOKEN_TO_BE_REPLACED

With most major stock markets around the world spending time at or near record... END_OF_DOCUMENT_TOKEN_TO_BE_REPLACED

For years, Baillie Gifford’s technology funds have been driving outsized returns for the mainly... END_OF_DOCUMENT_TOKEN_TO_BE_REPLACED