Do bruised fast fashion valuations mean now is the time to invest in Asos and Boohoo? 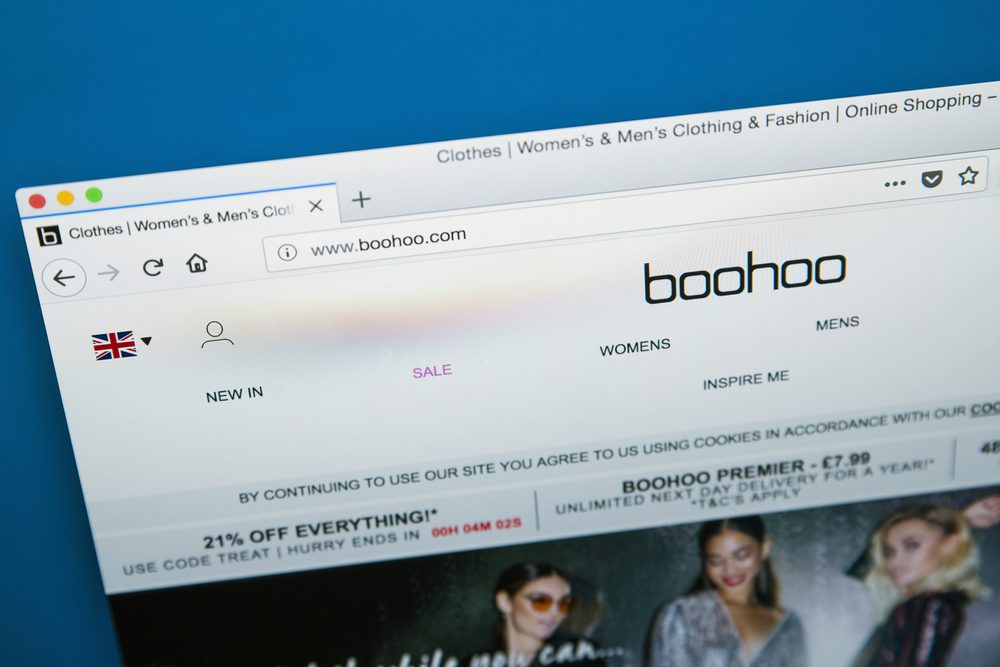 After their valuations boomed in 2020, the UK’s online fast-fashion giants of Asos and Boohoo have both seen their share prices slump in 2021. Both companies have their issues but there is a strong argument they are likely to prove temporary. Does that mean Asos and Boohoo’s 2021 drops in value, 50% and 44% respectively, now offer an excellent buying opportunity? Let’s take a look at the arguments for and against exposure to the share price of the two online fast-fashion stocks.

Easy come, easy go – both Asos and Boohoo have given up their Covid-19 pandemic gains

When the coronavirus crisis hit in early spring 2020, stock markets suffered a sharp sell-off that brought an abrupt end to a bull market stretching all the way back to 2008 and the start of the recovery from the international financial crisis. But financial markets pessimism didn’t last long. It quickly became apparent the pandemic and resulting restrictions on physical contact would favour companies most exposed to the digital economy.

The Boohoo share price gained 130% between an early April low and late-June high. It was then subsequently knocked for six by a scandal over working conditions in Leicester factories that formed part of its supply chain before recovering to levels about 15% up on the company’s pre-pandemic valuation. However, over the course of 2021, the Boohoo share price has dropped back to lows last seen in March 2019. 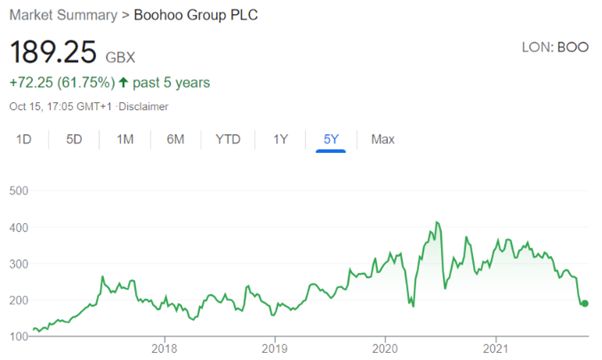 While Asos didn’t suffer from supply-chain scandals in the same way, its share price has also steadily dropped this year. Rising costs across its logistics and supply chains has dented investor optimism and dragged its valuation to below its pre-pandemic levels and almost 70% below 2018 highs. 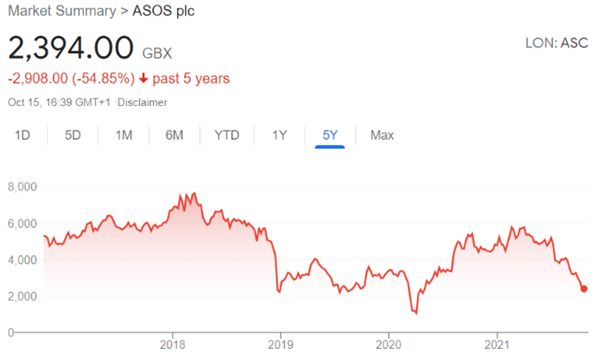 An announcement by Asos last week that it expects profits to drop by more than a third this year as a result of higher shipping costs, delivery delays and labour costs has accelerated the decline in the company’s valuation in place since April. The company’s chief executive Nick Beighton has announced he will move on from the role and the hunt for a replacement begun. But could he have been expected to foresee the logistical nightmare Asos has been caught up in?

There is some sympathy for Asos and Boohoo among investors with many seeing the two companies’ current difficulties as the result of extenuating circumstances. That would suggest once those storm clouds clear there should be calmer sailing, and valuation gains, ahead.

Analysts see the pace of the recovery from the pandemic-induced recession as one unexpected scenario that has caught Asos and Boohoo out. Both companies took the strategic decision to reduce inventories during the pandemic to reduce the length of the cycle that converts goods into cash.

That made sense at the time and their ability to quickly adjust the stock orders, both in quantity and the kind of garments (eg. loungewear orders replaced summer socialising outfits), was a major reason why markets initially rewarded both companies. But it also meant Asos and Boohoo were caught short by the pace of the return to normal demand patterns as well as the addition of ‘pent up demand’.

The two companies are now trying to build up their inventories while simultaneously meeting ferocious consumer demand. The problem is their peers around the world are all coping with the same issues, which has resulted in the supply-chain bottlenecks currently being experienced.

Ironically, Asos’s acquisition of failed high street brands including Topshop, was being viewed as a positive development, adding diversification and efficiency to the group’s online portfolio.

For investors, the question now is how long the external circumstances weighing on Asos might continue to hurt profits? Most analysts expect bottlenecks to have eased considerably within 6 months. However, permanently increased costs that will hit margins are likely. New warehouses may have to be invested in.

Is Asos currently undervalued based on its mid to long-term potential?

There is an expectation that Asos’s sales growth could dip to as low as 10% next year which would be expected to mean profits drop from the £177 million generated for the year to August over 2020/21. Current expectations are for £130 million.

The positive for future share price growth is that Asos has now reset expectations in a way that means they won’t now be overly difficult to exceed. The overall value of the business model and brand persists. With medium-term growth still expected to come in at 20% a year and a current valuation of just x16 predicted 2023 earnings, the Asos share price today promises plenty of upside.

How does the Boohoo share price upside compare to Asos?

The reputational damage suffered by Boohoo as a result of its supply chain problems, and presumption senior management can’t have been entirely unaware (even if the factories concerned were sub-contractors to suppliers the company had contracts with) but chose to turn a blind eye, is not insignificant. But the evidence suggests it’s also unlikely to have a major long term impact on sales if further issues can be avoided.

And Boohoo has some advantages over its still larger rival. It has better margins than Asos, 5.2% compared to 3.4% for the 2020 financial year. The company’s record with collaborations is also superior and it’s just announced its biggest ever with the actress and model Megan Fox. Boohoo’s long term record of very successfully monetising a strong social media presence looks set to continue.

An earlier stage company, Boohoo also has a slightly easier job to maintain higher growth rates for longer than Asos as it’s starting from a lower base. Overall, if Boohoo can avoid further ‘ethics’ grenades, it perhaps has the better upside potential of the two online fast-fashion rivals. But against the backdrop of recent valuation slides, both Boohoo and Asos shares currently look attractively priced.

That the international travel sector is, thanks to the Covid-19 pandemic, in a bit... END_OF_DOCUMENT_TOKEN_TO_BE_REPLACED

With a growing number of economists arguing there is a high chance we are... END_OF_DOCUMENT_TOKEN_TO_BE_REPLACED

While most still caveat the argument with the get-out clause it is far from... END_OF_DOCUMENT_TOKEN_TO_BE_REPLACED

Natural gas prices have rocketed with Russia accused of managing supply to drive up... END_OF_DOCUMENT_TOKEN_TO_BE_REPLACED

After their valuations boomed in 2020, the UK’s online fast-fashion giants of Asos and... END_OF_DOCUMENT_TOKEN_TO_BE_REPLACED