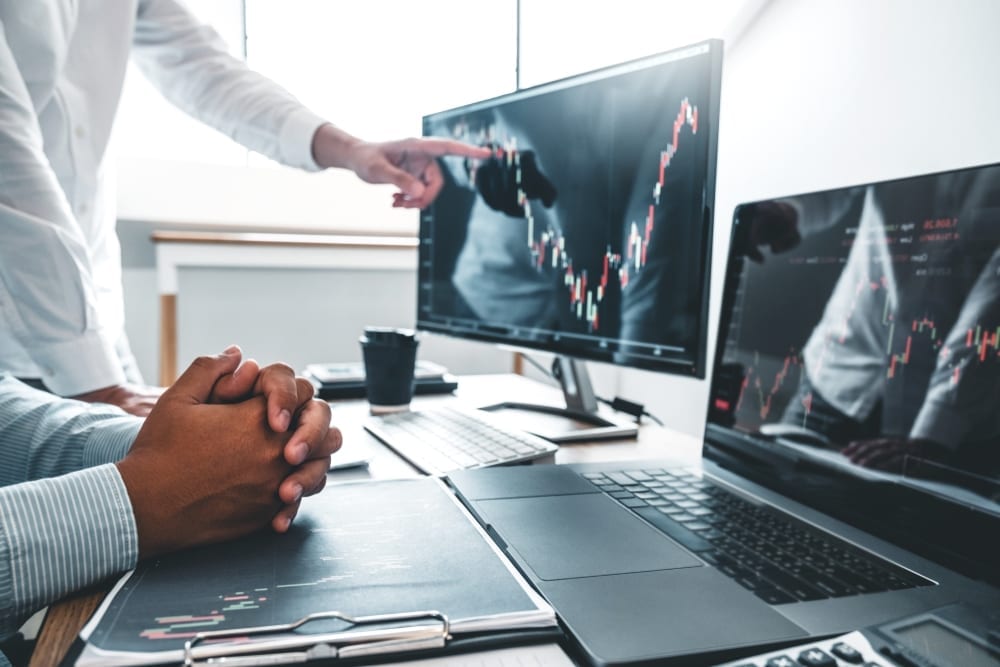 Global stock market yesterday closed to their second day of major gains after A $2 trillion coronavirus relief bill was agreed by Republicans and Democrats in the U.S. senate yesterday and the ECB gave itself additional flexibility around how to deploy €750 billion in bond buying. But a number of analysts warned investors to be cautious and not to presume the market has already returned to growth after a month of steep losses. An historical overview of the biggest single-day gains for major indices show that many happened during deep bear markets. And that they are often followed by renewed drops.

In London, The FTSE 100 recovered to the tune of 4.5% yesterday, adding to Tuesday’s 9.1% surge, the index’s largest one-day jump since 2008. On Wall Street, the Down Jones industrial average, the USA’s broadest-based major index, gained 2.4% on top of Tuesday’s 11.4% return. That was even more dramatic than the FTSE 100’s 12-year single-day record and hasn’t been equalled since as far back as 1933.

Since the start of the coronavirus-inspired sell-off, the FTSE 100 has shed around 23.7% of its total value and the Dow Jones industrial average 27.8%. Losses for both had been close to 40% before Tuesday.

Major economies from the UK, to EU and USA have signed off on investment into their economies at a level that has only ever previously been seen during wartimes early last century. In the USA measures have included additional funding for hospitals, hundreds of billions of dollars in financial support to businesses in the private sector, expanding unemployment benefits and a ‘helicopter drop’ of cash in the form of cheques worth $1200 being sent to millions of low and middle-income employees.

It remains to be seen how governments and central banks will cope with the aftermath of swollen budget deficits. But for now it is not having a negative impact on the rates investors are demanding to put their money into short term government debt, with yields at record lows as perceived safe havens are prioritised. Yields on short-term US Treasuries have dropped into negative territory for the first time in history as investors effectively pay to see their money, minus negative rates and inflation, kept safe.

Ben Bernanke, the former Fed chairman who led the central bank through the international financial crisis, offered some hope in an interview with CNBC. He believes that as long as the shutdown period of economies across the world doesn’t prove to continue for too long, economies and markets could bounce back relatively quickly. He bases that hope on the fact that the current situation is “a very different animal” from traditional recessions.

“It’s much closer to a major snowstorm or a natural disaster than a classic 1930s-style depression. It is possible there’s going to be a very sharp, short, I hope short, recession in the next quarter because everything is shutting down.

“If there’s not too much damage done to the workforce, to the businesses during the shutdown period . . . then we could see a fairly quick rebound.”

Even if that does turn out to be the case, stock market investors would be best advised to temper expectations of a definitive turn around having already started. There is already evidence this morning that markets in Europe will record fresh losses today. The FTSE 100 is down 1.5% as it heads into late morning. 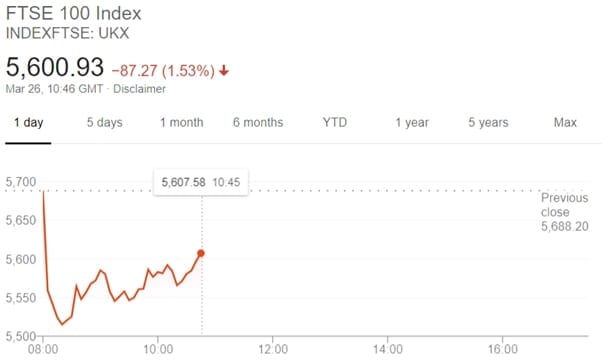 “A hefty rise in the FTSE 100 is welcome, should it transpire, but there remains the risk that any such advance proves fairly temporary should news on the viral outbreak continue to get worse and policy measures require a longer lockdown — and potentially a deeper hit to global economic activity — than currently hoped.”

“The FTSE 100 has just entered its fifth bear market in its history. Analysis of the four previous downturns in 1987, 1998, 2000-03 and 2007-09 shows that those bear markets were actually littered with sharp rallies, which cruelly turned out to be nothing more than bear traps for the unwary, who were tempted into a ‘buy-on-the-dip’ strategy, only to quickly find themselves in trouble.”

“The sharp and swift 1987 bear market happened so fast that investors only tried one, failed rally before buyers were swept away by Black Monday, October 19, 1987, and then even heavier losses on the following day as London caught up with a 20 per cent single-day fall in New York.”

However, for investors with the funds to do so, drip feeding investments at regular intervals at probably a wiser approach than hoping to time the bottom of the market. Doing so offers the best hope of as much of the value of new investments as possible being made towards the eventual bottom. That means largely ignoring the volatility and sticking to a dropping regular sums into an investment account. Sticking to major indices, rather than individual companies whose fortunes may vary considerably over coming months, is also a good tactic to spread risk.

A little over a week into 2022 we’ve already experienced some major market movements.... END_OF_DOCUMENT_TOKEN_TO_BE_REPLACED

One of the FTSE 100’s current disadvantages, when it has come to attracting international... END_OF_DOCUMENT_TOKEN_TO_BE_REPLACED

Did you know you could build wealth by investing in Lego? A study suggests... END_OF_DOCUMENT_TOKEN_TO_BE_REPLACED

With most major stock markets around the world spending time at or near record... END_OF_DOCUMENT_TOKEN_TO_BE_REPLACED

For years, Baillie Gifford’s technology funds have been driving outsized returns for the mainly... END_OF_DOCUMENT_TOKEN_TO_BE_REPLACED