Bitcoin investors have become used to tweets and remarks by Tesla founder and cryptocurrency enthusiast Elon Musk leading to wild swings in the digital currency’s value. In March Musk announced Tesla would begin to accept payments in Bitcoin and that the company had even invested $1.5 billion in the cryptocurrency.

By May, Musk had performed a u-turn and announced Tesla would no longer be accepting payment in Bitcoin. At least, until such time as it could be demonstrated the blockchain network it runs on was running on mainly renewable energy due to concerns over the huge volumes of electricity it consumes. 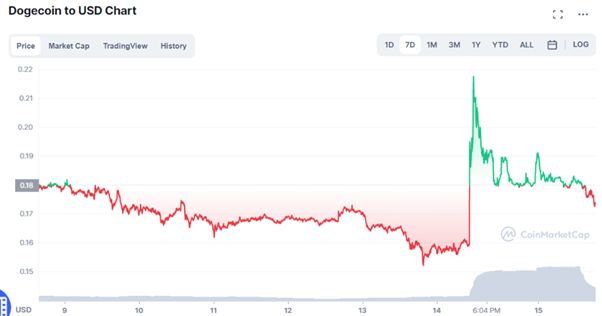 All the while, Bitcoin’s value see-sawed with the swings in sentiment that followed Musk’s utterances. Yesterday, the world’s richest individual turned his attention to Dogecoin, another cryptocurrency and one originally created as a ‘joke’ to highlight the absurdity of ‘just creating currencies’.

Despite its satirical start to life, Dogecoin is now the 10th most valuable cryptocurrency by market capitalisation, worth almost $23 billion. And Musk is also a fan. And yesterday, he tweeted Tesla would start to accept payment in Dogecoin, sending it up almost 20% from 16 cents to almost 22 cents. However, when traders realised the statement only referred to some Tesla-branded merchandise Dogecoin promptly dropped back to around 17 cents.

“Tesla will make some merch buyable with Doge & see how it goes.”

Despite being set up as a joke by two software developers eight years ago, Musk appears to be impressed by Dogecoin’s blockchain technology, which has scalability strengths compared to Bitcoin’s. In an interview with Time magazine, which named him its 2021 Person of the Year, Musk remarked:

“Fundamentally, Bitcoin is not a good substitute [for fiat transactional currencies]. Even though it was created as a silly joke, Dogecoin is better suited for transactions.”