Market volatility since the start of the year may not have been good for the Goldman Sachs share price, down 21.5% since the beginning of 2022, but the same can’t be said of its trading business. Traders at the second largest investment bank in the USA have had a blockbuster beginning to the year, generating over $100 million in profit in a day on 32 separate occasions.

Goldman Sachs’ trading division also achieved net revenues of over $50 million on 45 of the 62 trading days over the first three months of the year thanks to market volatility creating more frequent and potentially more profitable trading opportunities. No quarter in the last decade has seen the bank’s traders record more nine-figure daily net gains. Regulatory filings released on Monday also showed there were only six days over the period that resulted in net losses for the unit. Two of those daily losses were over $100 million. 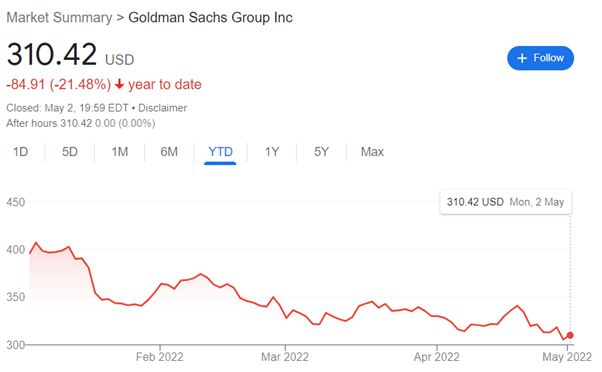 With a history stretching back to 1869, the $105 billion-valued Goldman Sachs is one of Wall Street’s best known investment banks. Employing 40,000 staff globally the bank is also more focused on investment banking and trading than other big American banks, though it does also run a retail banking operation. The bank recently launched Marcus, its online-only retail bank, in the UK.

The success of Goldman Sachs’s traders wasn’t, however, enough to compensate for a steep drop-off in dealmaking activity over the first quarter. That saw the bank’s net earnings fall to $3.94 billion for diluted earning per common share (EPS) of $10.76 compared to $10.81 a year earlier.

“There’s so much uncertainty. The one thing we do know is that volatility is extraordinary. We have the same volatility right now as we had in ’08 and ‘09 in the markets.”

She also noted “very odd dynamics” leading to “really strange” market behaviour, commenting “look at Friday. You had the bond market sell off at the same time as equities.”

The Fed is due to meet today and tomorrow with policymakers expected to announce a 0.5% rise in interest rates for the first time since 2000 in a bid to bring rampant inflation under control. If that decision is taken banks, which earn more on their loaned capital when interest rates are higher, can expect to see their valuations boosted.