Of the sectors worst hit by the Covid-19 pandemic this year, the airline industry has a strong claim for one of the top spots. Despite the fact that international travel all but ground to a halt for several months this year, the share price of Wizz Air, the Hungarian budget airline specialising in East European routes, is less than 6% down on its January high.

In fact, Wizz has been doing so well that analysts expect the budget airline to join the FTSE 100 index of the hundred most valuable companies on the London Stock Exchange early next year. There’s still one update to the benchmark index left this year, that Wizz Air probably won’t quite make. But it won’t be far away and given its robust performance this year while its industry is crippled, it would be a major surprise if ascension to the FTSE 100 isn’t confirmed in early 2021.

Wizz Air’s current valuation is around £4 billion, higher than Easyjet, which operates a fleet almost three times the size of Wizz’s, and in 2019 flew over double the number of passengers. However, over 2020, Wizz Air has kept more of its usual schedule running. At present around 45% our routes are active, compared to 20% of Easyjet’s and 30% for Ryanair.

Having been founded in 2003 by Hungarian entrepreneur Jozsef Varadi, Wizz Air hasn’t yet reached the milestone of two decades of operations but is already Europe’s eighth largest airline. In 2019, it was the European airline with the highest rate of growth, with passenger numbers up 17.7% to 40 million.

Wizz Air’s business model was made possible by first Hungary and then several other East European nations, such as Poland, Romania, Bulgaria, the Czech Republic and Slovakia joining the European Union. Its first flight was in 2004, between London Luton and Katowice in Poland. The airline was backed by U.S. private equity house Indigo Partners and went public on the London Stock Exchange in 2015.

Wizz Air currently operated a fleet of a little over 120 aircraft, all of which are new or relatively new Airbus A320 and A321 jets. It leads the market as the largest airline by passenger numbers across a number of East European markets, including Hungary, Ukraine, Romania and Bulgaria. It is second to just Ryanair in Poland.

Its passenger numbers total of 40 million to the year ended March saw Wizz Air double its after-tax profits to €281 million. Between 2015 and 2017 the Wizz Air share price doubled, before doubling again between 2017 and February of this year. And while the March sell-off saw the company’s share price crash, it has now recovered to within touching distance of pre-pandemic levels. 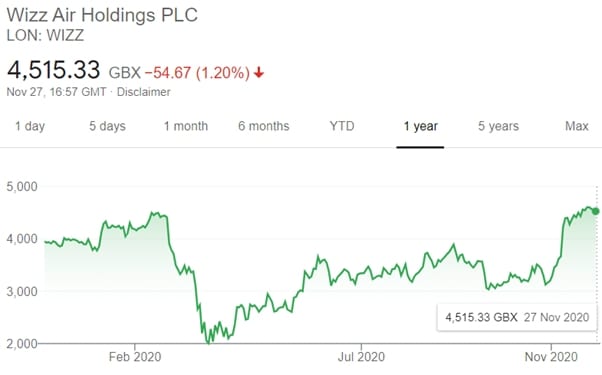 Wizz Air has benefited from a combination of the fact lockdown restrictions were generally looser across its East European heartlands than in the West and being well run. Wizz is less dependent on business travel than Ryanair and Easyjet, with its strengths ferrying migrant workers and permanent West Europe residents originally from East Europe back and forward, as well as the short haul leisure travel markets.

With the winter period still expected to be troubled for the airline industry, followed by a strong recovery over the summer as short-haul tourism kicks back off, Wizz should be less badly hurt than Easyjet and Ryanair. All airlines make most of their profits over the six months between April and September but Wizz is particularly heavily weighted towards the summer period.

Where once Ryanair was the aviation industry’s chief disruptor, the Irish budget flights giant is now the establishment. Before the pandemic, it was expected to carry around 150 million passengers this year – at least three times the total of British Airways. Many investors now view Wizz in a similar way to how Ryanair was looked on 15 years ago. That’s playing into the trend of investors looking beyond the pain of 2020 to opportunities beyond the pandemic.

Wizz entered the pandemic with a strong cash position, able to call on €1.5 billion of liquidity. The airline also reacted quickly to the onset of the pandemic and lockdown restrictions, immediately reducing its workforce by 20%, cutting 1000 jobs. That’s allowed it to keep losses to a minimum and it still has access to the same levels of liquidity as it did earlier in the year. That should mean it goes into 2021 in a strong position relative to competitors, and able to expand.

New bases have recently been opened at Gatwick, replacing Norwegian and Virgin Atlantic who gave up their slots, and Doncaster. The latter will mainly fly Brits to holidays in southern Europe. A similar strategy has been adopted in Wizz’s Scandinavian and Italian markets.

Wizz also operated flights between Europe and the Middle East business hubs of Dubai and Abu Dhabi – a market Easyjet and Ryanair failed to see the potential of but is working well for their upstart rival. Wizz’s demographic is a combination of the East European diaspora in the west flying back and forward to see family and friends and, often young, West European holidaymakers.

And Wizz is ambitious. Mr Varadi has aired the view his airline can be bigger than Easyjet within 5 years.