EasyJet founder Sir Stelios Haji-Ioannou, who still owns 34% of the company despite stepping down from its board over a decade ago, yesterday waded back into the airline’s strategic management and threatened to sack its board of directors. The Greek-Cypriot businessman who is now based in Monaco, criticised the EasyJet board for appealing to the UK government for emergency loans.

He insists that the otherwise financially healthy budget airline should instead raise the cash it needs to cover costs while its fleet is grounded as a result of the Covid-19 pandemic from investors, through a £600 million rights issue. And that if directors don’t cancel a £4.5 billion order for Airbus to deliver 107 new jets over the next 3 years, citing force majeure, he would fire them.

In a letter to directors and shareholders, he wrote he did not“believe that loans is the way to save Easyjet. The way to save a normally profitable company with a fleet of aircraft worth £4 billion is to raise more equity from the markets using a rights issue.”

It’s the second controversial episode to involve Sir Stelios in the past couple of weeks after he was himself criticised for accepting £60 million as part of Easyjet’s £174 million dividend payment that the airline went ahead with.

Including yesterday’s share price loss of 7%, EasyJet’s value had slumped over 90% since the beginning of the Covid-19 outbreak. The company’s share price has rebounded by over 5.5% today. 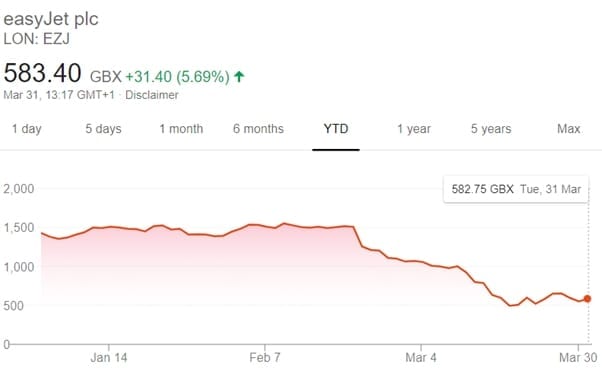 Easyjet carries nearly 100 million passengers a year, second only to Ryanair in its share of the European short-haul aviation market. The airline is London Gatwick’s largest by flight slots. The company was continuing along an expansion strategy, which the Airbus order was a key part of. However, Sir Stelios believes that the board should now shelve those expansion plans and cancel the contract rather than continue to pursue growth funded by government loans.

Yesterday he appeared incensed by what he clearly sees as the company’s board’s refusal to engage with him as their largest shareholder. His letter outlined his intention to hold general meetings to remove board members “one by one for dereliction of duty”.

He insists directors should cite the pandemic as a “force majeure” to annul the Airbus contract and believes shareholders may have been misled over the contract. Further stoking the flames, Sir Stelios also insisted John Barton, chairman of the Easyjet board, should have ordered an investigation into whether anyone at Easyjet had been bribed by Airbus to push the huge £4.5 billion order through.

He set out the ultimatum that if the board had not presented a plan by noon today on how to extricate the company from the Airbus company he would start sacking directors. Non-executive director Andreas Bierwirth was named as first for the chopping block, followed by chairman Mr Baron and Dme Moya Greene, the former Royal Mail CEO. All three hold non-executive roles on the board.

As of 13:30 today no further announcement had been made by either Easyjet nor Sir Stelios.

FCA Piles Pressure On Google To Cut Out...

Does The Spectacular Snowflake IPO Have Shades Of...