EasyJet Records First Loss In 25-Year History With £1.25 Billion Slide Into The Red

Budget airline EasyJet, among the world’s most profitable for most of its 25-year history, has informed investors that total full year losses for its fiscal year to the end of September will hit £1.25 billion. Full year operating losses, said the airline yesterday, will amount to between £815 million and £845 million. An additional £440 million in losses will result from currency hedging gone wrong, write-offs, write-downs and expenses related to laying off around 30% of its workforce – 4500 staff.

The EasyJet share price has fallen by 62.4% in 2020 as a result of the disruption to travel caused by the Covid-19 pandemic. For 3 months the airline’s entire fleet was grounded and over the summer period there was significant disruption as holiday destinations moved in and out of UK’s quarantine rules, often at short notice. 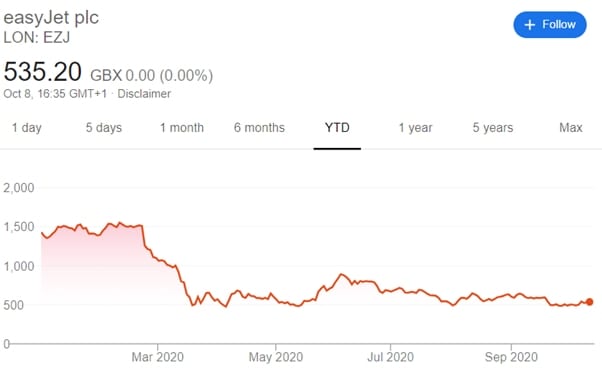 The end result will be the reporting of by far the worst performance in EasyJet’s quarter century of operations and its first ever loss. Over the course of the financial year, the first 4-5 months of which were under normal conditions before the pandemic struck, 48 million passengers were carried. That’s around half of the 2018-19 financial year total and a level similar to that last seen in 2010.

The immediate future also looks financially bleak with only 25% of the usual schedule how planned over Christmas and into early 2021. That’s even less than the 38% capacity that was achieved over the summer schedule. Investors were told that EasyJet has little idea what the new financial year has in store, with the only certainty that shareholders will not be receiving dividends again any time soon.

“This year will be the first time in its history that Easyjet has ever made a full-year loss. Aviation continues to face the most severe threat in its history and the UK government urgently needs to step up with a bespoke package of measures to ensure airlines are able to support economic recovery when it comes.”

EasyJet founder Sir Stelios, who still owns 33% of the company but no longer holds an active role, has been engaged in a long running dispute with the board, attempting to have 4 members removed from their positions earlier in the year. The motion failed to pass the extraordinary general meeting held in spring but Sir Stelios has not eased off in his criticism.

Yesterday he returned to his biggest bugbear, contractual commitments to buy new jets from Airbus, which he says will mean EasyJet will be unable to repay the £600 million in taxpayer loans it has received and which are due for repayment next spring.

EasyJet itself insists it is still financially sound, despite currently burning through cash at a rate of around £700 million a quarter. Net debt has reached £1.1 billion but the airline has access to around £2.3 billion in cash, made available through a combination of money raised from shareholders over the summer, government loans, furlough support and the sale and leaseback of aircraft. The reduction in the flying schedule over the Christmas period is being made with a view to reducing the burn rate.

For now, the focus is on maintaining liquidity until the pandemic passes, with Mr Lundgren reassuring shareholders there would still be an airline industry at that point. Commenting for The Times newspaper, Julie Palmer, a partner at restructuring specialists Begbies Traynor, commented:

“Easyjet has taken a smart decision and is focusing on its most profitable routes during the winter season. However, government intervention has been limited and it needs to step up and offer more aid for this sector, not only to protect thousands of jobs, but also our ability to do business internationally post the pandemic.”