The share price of budget airline easyJet has gained over 5% so far this week after it was boosted by the company announcing a “strong and sustained” recovery in trading since the easing of pandemic travel restrictions. The company’s results for the half year to the end of March showed a contraction in losses compared to the previous year, surpassing analyst expectations.

Chief executive Johan Lundgren said that “self-help” measures had helped the company narrow losses despite the continuing challenges posed by the Covid-19 pandemic, rising fuel costs and expenses related to it scaling up operations again. Over March easyJet said it had operated at 80% of its pre-pandemic 2019 levels and at 67% over the quarter covering the first three months of the year when 11.5 million passengers were carried. Only 1.2 million passengers flew with easyJet over the same quarter a year earlier. 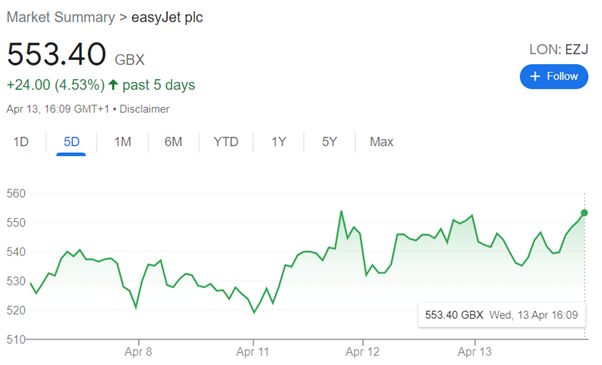 The lifting of travel restrictions into the UK from January has, said the company, coincided with its strong recovery. The airline expects revenues of £1.5 billion over the first half of its financial year to the end of March and a pre-tax loss of between £535 million and £565 million compared to analyst expectations for a £618 million shortfall.

Mr Lundgren also told shareholders the company has “a positive outlook for Easter and beyond” thanks to daily booking volumes tracking ahead of pre-pandemic levels over the past six weeks. The summer period is expected to see flights exceed their pre-pandemic levels as a result of pent-up demand after two interrupted holiday seasons in previous years.

Minimal exposure to Eastern Europe and no routes to either Ukraine, Russia or Belarus has meant the war in Ukraine has had very little impact on the carrier. No flight routes cross the airspace of the three countries either meaning no requirements for rerouting and potential increases in fuel consumption.

EasyJet also told investors its easyJet Holidays business, which packages flights with hotel accommodation and other add-ons “continues to strengthen its position as a significant player in the holidays market”. The company has sold over 70% of bookings available at what it described as “significantly stronger” margins than in 2019.

There has, however, been a continuing hangover from the Covid-19 pandemic with easyJet cancelling hundreds of flights over the Easter period due to staff shortages as a result of infections. The company said it has chosen to cancel flights in advance to allow customers “to rebook onto alternative flights”.

Mr Lundgren rejected the accusation the company had intentionally sold flights it could not fulfil as “absolutely not fair” because crew absence levels were at twice their normal rates. He stressed:

“We were having in some cases up to 20 per cent of absence, and you wouldn’t expect any airline at any point in time to be able to cover that.”

He also pointed out that  94% of planned flights had gone according to schedule over the past week, despite the high profile cancellations and requested the Department for Transport speed up the process of security vetting for new employees to help fill some of the staffing gaps. The budge airline also announced a sale and leaseback deal for ten of its fleet’s Airbus A319s which has generated $120 million.