The EasyJet share price shed over 3% today to give up a chunk of the gains the budget airline had made earlier in the week. The new slide came after it announced a £213 loss for the last quarter of the year covering the Christmas period, taking losses for the Covid-19 pandemic period to £2.2 billion. The airline also told investors it is still burning through £150 million in cash every month as it struggles to build capacity back up.

The short-haul airline that makes most of its income shuttling holidaymakers and business travellers around Europe said it is still only operating at around half of its pre-pandemic capacity. However, it is hopeful that pent-up demand and an end to travel restrictions mean it will return to pre-pandemic levels by summer and enjoy much brisker trade than of late over the Easter and spring period. 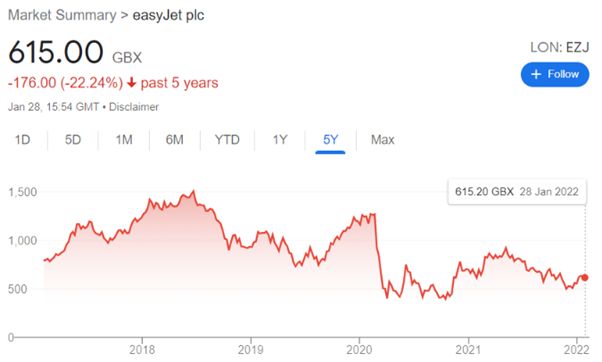 But before then the airline company will again have to absorb deep losses over the current quarter, which is traditionally its weakest of the year. Even a strong summer period, think most analysts, will be insufficient to see the company return to profit this year. EasyJet’s value is still less than half of what it was in February 2020 before the coronavirus-induced market sell-off that hit later that month and saw markets dive into March before starting to recover. The share prices of rival budget airlines Ryanair and WizzAir have recovered much more strongly in comparison to EasyJet’s and are now close to their pre-pandemic levels. There have been concerns around whether EasyJet could survive the pandemic but investors contributed £1.2 billion last autumn to bolster its balance sheet.

The EasyJet share price is closing the week at around £6.15 compared to over £15 before the pandemic. However, there is now hope the worst may be behind the airline and it can begin its, potentially long, journey back to health. Chief executive John Lundgren attempted to soften the announcement of another hefty loss with a bullish statement on where things go from here for his company:

“Booking volumes jumped in the UK following the welcome reduction of travel restrictions announced on January 5, which have been sustained and given a further boost from the UK government’s decision this week to remove all testing requirements.”

“We believe testing for travel across our network should soon become a thing of the past. We see a strong summer ahead, with pent-up demand that will see easyJet returning to near-2019 levels of capacity, with UK beach and leisure routes performing particularly well.”

For now, however, forward guidance for the immediate quarter remains cautious with the company admitting it has fallen short of its expectations to be at 80% capacity by this quarter, sitting at just 67%. However, with most analysts confident the company will eventually return to strength, and profit in the 2022-23 financial year, EasyJet shares could offer a good buying opportunity at current levels.