The Easyjet share price has gained 2.2% today, adding to another 2.3% gain yesterday as the budget airline announced the postponement of the delivery of new passenger jets. Easyjet will also return dozens of aircraft it currently has on lease as it trims its fleet in an effort to steer itself through the aviation industry crisis brough on by this year’s Covid-19 pandemic. 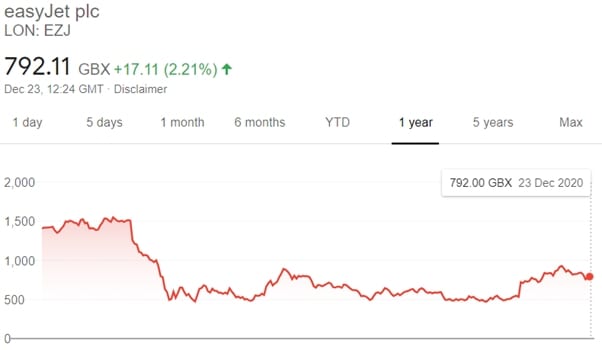 Easyjet had been due to take delivery of a number of new aircraft that are part of a bulk order deal with Airbus. It has, however, reached a compromise with the European aviation company to postpone the delivery of jets that had been due in the new year.

Before the pandemic struck early this year, Easyjet’s fleet had grown to 342 jets as the company continued to expand. However, even if Covid-19 vaccination programs should mean life has returned to relative normality by summer, it is expected to take the short-haul airline sector to until at least 2023 before passenger numbers fully recover. As a result, Easyjet plans to pare back its fleet to 300 jets by next summer. That will be achieved through a combination of delaying buys and handing backed leased aircraft.

The airline is also leveraging the jets it owns to ease cash flow issues of the current crisis through sale and leaseback deals. £717 million has been raised from 32 aircraft in this way. That’s seen the overall percentage of the Easyjet fleet directly owned by the company drop to 55%.

The company has had to contend with losses of £1.3 billion booked over the financial year to the end of September, with £774 million burned through from April to June while most of the fleet was grounded. However, with access to another £3 billion of cash, despite net debt of £1 billion, the company should come out the other end of its industry’s crisis in a relatively strong position.

Current cost saving measures included 80% of the fleet being currently grounded and only flying consistently profitable routes. That reduced capacity status is expected to continue well into the new year.

Despite delaying delivery, Easyjet remains committed to its deal with Airbus and will eventually take all 101 jets. A significant discount to the official $110 million price tag per aircraft is believed to have been secured. However, the stance has caused friction with founder Sir Stelios Haji-Ioannou, who has criticised the company’s management for failing to cancel the order. Sir Stelios still owns 33% of the company.

“This amendment to our longstanding agreement with Airbus reflects Easyjet’s significant fleet flexibility, as well as the benefit of highly attractive aircraft pricing. In this period of uncertainty, this flexibility is even more valuable as it will enable us to quickly flex our fleet size in response to customer demand [and] to capture pent-up demand as customers return to the skies.”

Since he founded it as an online bookseller from the garage of his rented... END_OF_DOCUMENT_TOKEN_TO_BE_REPLACED

Last month the board of Wm Morrison, the UK’s fourth largest supermarket chain by... END_OF_DOCUMENT_TOKEN_TO_BE_REPLACED

The duration of the Covid-19 pandemic has seen some significant changes in consumer behaviour.... END_OF_DOCUMENT_TOKEN_TO_BE_REPLACED

With bond yields at historical lows, they are not a particularly attractive investment for... END_OF_DOCUMENT_TOKEN_TO_BE_REPLACED