The Easyjet share price gave up some of the welcome gains encouraged by positive Covid-19 vaccine announcement as it fell almost 2.5% today after announcing a £1.3 billion loss. The budget airline’s share price has slumped almost 50% since the start of the pandemic, trading at around £15 early in the year. The loss announced today is the largest in Easyjet’s 25-year history. 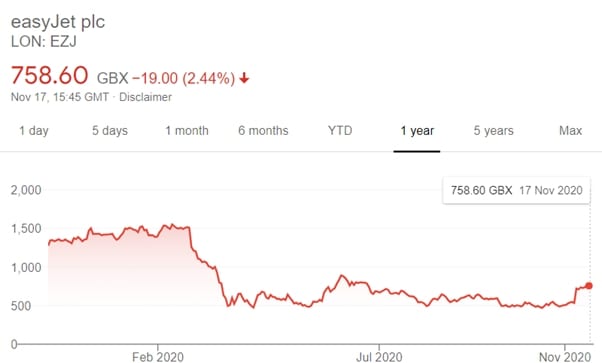 The record loss was booked despite the company slashing expenses by cutting unprofitable routes over the past several months. Services over the winter period will be down around 80% on last year’s flight schedule and operated at less than 50% over the summer period after months of the entire fleet being mothballed at the hight of the first wave of the virus.

“Easyjet has not only withstood the impact of the pandemic but now has an unparalleled foundation upon which to emerge strongly from the crisis.”

The share price hit on the loss announcement was relatively modest as it met forward guidance already issued by the airline. Today’s results simply confirmed expectations, which were firmed up as an £835 million operating loss plus £438 million in one-off right downs, taking the total loss to £1.273 billion. Over the spring and summer season, underlying losses were £642 million.

While anticipated, the extent of Easyjet’s losses are far more significant than those recently posted by budget rival Ryanair, which reported an £172 million loss for the period between April and September. Easyjet saw passenger numbers over the 12-month reporting period drop by half compared to the previous financial year, to 48 million. Average ticket prices were also down 10%, dragging revenues down by 53% to £3 billion.

Easyjet believes that it would have carried around 100 million passengers over the period, slightly up on the previous year, had it not been for the brutal impact of the pandemic. With a 335-strong fleet, Easyjet is usually the largest operator at Gatwick, Manchester and Luton airports – 3 of the UK’s top 5 busiest airports.

The cost of financing 4500 redundancies, around 30% of Easyjet’s total workforce, came in at £123 million. Average redundancy packages were worth £27,000. Another £311 million charge was booked against future losses expected to result from the company unwinding foreign exchange and jet fuel hedging contracts. £75 million was taken as a charge for losses resulting from the sale and leaseback of aircraft and the capital value of leased planes.

However, having raised £3.1 billion of cash from investors and borrowing, Easyjet is confident it has the reserves to not only weather another several months of uncertainty but to come out the other end in a strong position. A statement from the company read:

“Based on current travel restrictions in the markets in which we operate, Easyjet expects to fly no more than circa 20 per cent of planned capacity for [the October-December] quarter. We remain focused on cash generative flying over the winter season in order to minimise losses during the first half [to the end of March].

“We retain the flexibility to rapidly ramp up capacity when we see demand return. At this stage, given the continued level of short-term uncertainty, it would not be appropriate to provide any further financial guidance for the 2021 financial year.”