The Easyjet share price has soared by close to 11% today after weekend news of a critical Friday vote that could potentially see the budget airline’s management forced out. Easyjet’s founder Sir Stelios Haji-Ioannou, who still owns 34% of the company despite stepping back from an active role on the company’s board in 2010.

Sir Stelios, who took the decision to walk away from active leadership of the company he founded precisely because he wanted to be able to take on the role of an activist investor should the need arise, wants to remove four of Easyjet’s current directors. His company was the world’s 8th largest airline as of the end of 2019 and second only to Ryanair in Europe in terms of revenues and passengers carried. 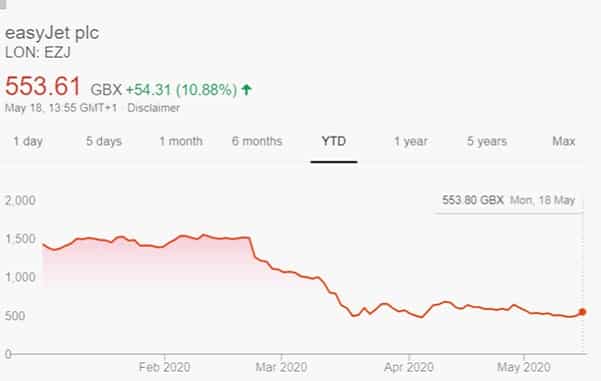 Sir Stelios has made repeated statements over the past couple of months to the effect that he believes at least one member of the current board may have been ‘bribed’ into concluding an order for 107 Airbus planes. The deal was signed off on in 2013 but Stelios believes that going through with it risks the airline’s survival in the post-coronavirus reality. He also doesn’t believe such an aggressive deal should have been concluded so far in advance of delivery of the vehicles, due to the potential for circumstances to change.

The vote he has called on Friday will ask shareholders to decide the futures of four members of the Easyjet board, including the senior trio of chairman John Barton, chief executive Johan Lundgren and the finance director, Andrew Findlay.

“This is a good contract, it’s great-value kit we are buying and it has flexibility. If we walk away, the penalties would be massively detrimental.”

Lundgren has also voiced criticism of the UK’s decision to oblige anyone flying into the UK to be quarantined for 14 days.

However, which way the vote might swing on Friday is far from certain. Many investors and observers believe that Sir Stelios may have some valid points in his criticisms of the Easyjet board’s decision making. Even if the way he has expressed them might be considered overly aggressive and churlish.

Sir Stelios first voiced his disapproval shortly after taking receipt of a £60 million dividend from the company in March. He then wrote to the board warning them that the £4.5 billion in payments due to be made to Airbus. The devastation of the airline industry that has resulted from the Covid-19 pandemic has left Easyjet exposed, especially in the context of that huge upcoming expense commitment.

There is a compelling argument that Easyjet should be negotiating hard with Airbus. It may take years for Europe’s aviation sector to recover and Airbus are not in a strong position to push back. But the manner in which Sir Stelios has approached the situation has alienated the Easyjet board. Insinuating, several times, bribes may have been paid hasn’t helped. He recently offered £5 million for any information on alleged misconduct.

Sir Stelios’s argument that the next 3 years should be about Easyjet conserving cash may be valid. But he also has a history of butting heads with the company’s management teams, who have objectively performed very well over the decade since he stepped back. Many would say it is little coincidence the company has done so well since. It is, says the consensus opinion, run more professionally.

It remains to be seen what the outcome of Friday’s meeting is. But whatever way the vote goes, a more level-headed approach by Easyjet’s founder would almost certainly have been beneficial.