Easyjet has raised an addition £608 million in cash, taking the amount of funding it has raised since the beginning of the coronavirus crisis to over £2.4 billion. However, alongside the announcement of the new raise, achieved through the sale and leaseback of 23 of its aircraft, the budget airline told investors over the weekend that it would continue to assess further funding options. 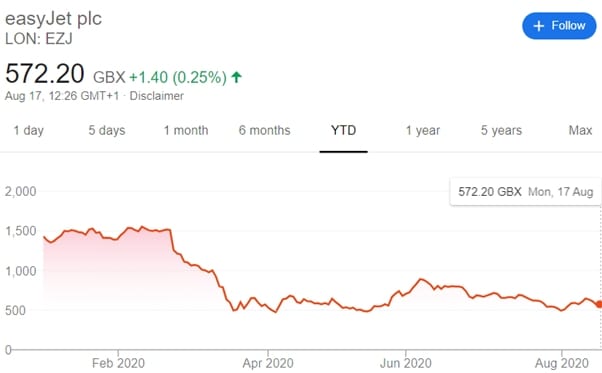 The Easyjet share price has inched up 0.25% during Monday morning trading after the announcement of the sale and leaseback of five Airbus A321neo aircraft. The deal, which will see the jets leased back to Easyjet until the are around 10 years old, was done with Shan 37 Ireland Company, a unit of Bocomm Leasing. The sale and leaseback strategy, designed to free up cashflow to allow the airline to survive over the next couple of years, was first announced in May.

New credit facilities, loans, access to the government’s Covid corporate financial facility and a new share placing have all been used to bring in £2.4 billion in cash flow. However, optimism that the summer holiday season would not be a total washout after lockdown in the UK was eased and over 50 countries put on a ‘safe list’ of air corridors has quickly dissipated over the past couple of weeks. First Spain and now France were taken off the list at short notice, leaving hundreds of thousands of holidaymakers facing 2-week quarantines on their return home. That’s now put many more others off attempting to get on a flight to sunnier climes before schools go back.

After France, the Netherlands and Malta were all added to the list of countries subject to quarantine restrictions for those travelling from them to the UK, the Easyjet share price dropped 6.5% on Friday. The airline would have expected to carry around 100 million passengers over 2020, and normally operates over 150 flights a week between the UK and France alone. Easyjet now expects to carry as few as 30 million passengers this year.

The airline is slashing its 15,000-strong workforce by 4500 over coming months and expects to operate only 30 per cent of its usual schedule of flights between July and September, depending on whether further quarantine restrictions are imposed.

The carrier announced over the weekend that it “will continue to review its liquidity position on a regular basis and assess any further funding opportunities”.

Despite the new quarantine requirement coming into place, Easyjet will not be cancelling any scheduled flights over the next few days to countries whose status has changed. The airline informed travellers:

“We plan to operate our full schedule in the coming days. If customers no longer wished to travel, they could switch their flights without a change fee, or receive a voucher for the value of the booking”.