A tweet by Elon Musk suggesting that Tesla’s share price was “too high” wiped about $14 billion from the value of his company on Friday. No stranger to getting himself on the wrong side of securities regulators in the USA, Musk is likely to again find himself in their line of fire after posting the tweet “Tesla stock price is too high imo [in my opinion].” 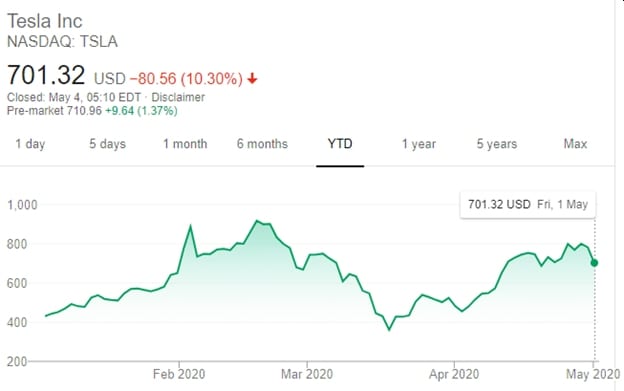 The Tesla share price dropped by up to 12% in afterhours trading after Mr Musk had taken to Twitter to express his opinion the market was overvaluing his company. The electric car company’s co-founder and CEO had been behaving himself recently on social media. A 2018 settlement with the US Securities and Exchange Commission, after Musk found himself in hot water for publically announcing he planned to take Tesla private and had the investors to do so lined up, saw him promise not to tweet in relation to the company unless he had board approval to do so. Presumably his latest incendiary tweet did not meet that criteria.

Tesla had been enjoying a positive week with its share price up 9% after the company reported a surprise first quarter profit on Wednesday. However, that $13 billion boost to Tesla’s valuation has now been wiped out.

The Covid-19 pandemic and lockdown appears to be getting to Musk, who published a series of tweets including the one questioning Tesla’s current valuation. In one post on the microblogging platform he told followers “I am selling almost all physical possessions. Will own no house.”

In another, he wrote:

“Don’t need the cash. Devoting myself to Mars and Earth. Possession just weigh you down. Just one stipulation on sale: I own Gene Wilder’s old house. It cannot be torn down or lose any of its soul.”

When the Wall Street session closed on Thursday Tesla’s valuation stood at $144 billion. On Friday, the company’s share price had eased down by 2.8%, dropping the overall market capitalisation to around $140 billion. However, within an hour of his tweet, the share price had dropped 12.6%, before eventually recovering slightly to a final 10.3% loss for the day.

It now remains to be seen how markets will react to Musk’s most recent example of erratic behaviour, having had the weekend to reflect on it.

Sage of Omaha Warren Buffet Sells Out Of Airlines