The Entain share price soared by 18% yesterday and has added another 6% to those gains today on news of an acquisition approach for the FTSE 100 online betting giants by U.S. rivals DraftKings. The Boston-based American company, which is itself valued at $21.3 billion after listing on the Nasdaq exchange last year through a reverse-merger Spac listing, reportedly has a cash and stock bid on the table worth £28-a-share that values Entain at $22.4 billion.

Entain, which owns the Ladbrokes, Coral, Sportingbet, Bwin and Party Poker brands, is one of the giants of online sports betting and gambling with licenses in around 25 countries. It also owns about 3000 physical betting shops, mainly in the UK and Ireland. 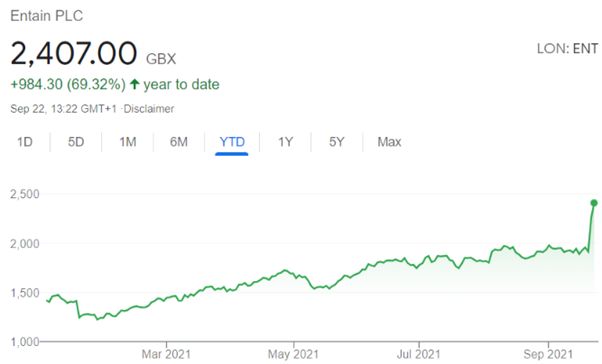 DraftKings was founded in 2012 and built up a large audience of fantasy sports leagues fans by offering leagues and other contests as well as newsletters and video content. As the online sports betting market in the USA has opened up in recent years after legislative control of the sector was handed to states from Federal lawmakers, DraftKings has expanded into the market. It now runs a sportsbook in the 14 states to have legalised and issued sports betting licenses.

Entain is also present on the quickly expanding U.S. market through a joint venture with MGM Resorts, the casino operators. Acquiring an online sports betting license in U.S. states to have legalised the practice requires first having a physical presence and gambling license in the state. Casino operators like MGM Resorts who met those criteria didn’t, however, have much if any experience with the online business model. That has seen partnerships established with experienced online operators like Entain, who is the minority partner in a U.S. joint venture with MGM.

That complicates any potential takeover of Entain by DraftKings and sparked a tetchy response from MGM yesterday. The casino operator said any deal would need its agreement due to an “exclusive partnership” agreement it has with Entain in the U.S. MGM made its own approach to Entain over a potential takeover back in January but was put off by the likely cost.

Entain yesterday confirmed a second approach at £28-a-share had been made after it rejected an initial £25-a-share gambit but that there was “no certainty” that would lead to a formal bid. A statement was released saying:

“The board of Entain confirms that it has received a proposal from DraftKings to acquire Entain, the consideration for which would include a combination of DraftKings stock and cash.”

DraftKings said it could not comment due to Takeover Code rules but is known to have had its eye on the UK market for some time as it seeks to beef up its sports betting and online casino business and expertise. Its share price lost 7.4% during the Wall Street trading session with investors presumably concerned at the cost of any Entain deal.

“MGM believes that having control of the BetMGMCOR joint venture is an important step towards achieving its strategic objectives. MGM will engage with Entain and DraftKings, as appropriate, to find a solution to the exclusivity arrangements which meets all parties’ objectives.”