The Entain share price suffered an 11.9% drop yesterday on news a proposed takeover of the Ladbrokes and Sporting Bet owner had fallen through. MGM Resorts International, the U.S. casino group Entain has a joint venture with in the USA, gave up on its £8.1 billion bid. With it becoming clear a larger sum would be needed to entice the deal over the line, the American bidder baulked at raising its offer. 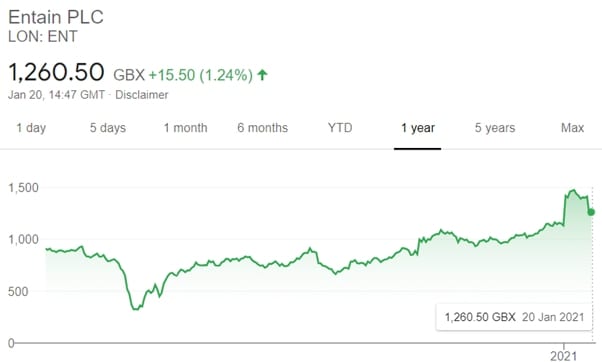 MGM insists that while it is committed to becoming an international gaming and entertainment company, it is determined to pursue the ambition while maintaining “a disciplined framework”, when it comes to acquisition and other expansion opportunities.

Stock market rules mean the official withdrawal of the £8.1 billion bid on the table, means a new bid cannot be made for at least six months. Unless another bidder comes forward in the meanwhile. However, the feeling is the U.S. joint venture between Entain and MGM will discourage other potential bidders.

MGM’s final offer to Entain was worth £13.83-a-share, having had an earlier £12.85-a-share offer rejected. The higher bid would have seen Entain investors receive 0.6 MGM shares for each Entain share held, with a part-cash alternative also on offer.

MGM’s official statement read that after “careful consideration and having reflected on the limited engagement between the respective parties” the decision was reached not to make an increased or firm offer. According to quoted sources close to the negotiations, with Entain’s share price reaching an all-time high around Christmas, MGM weren’t comfortable paying the significant premium on that being held out for.

However, one City source told The Times newspaper they think there is still a reasonable chance the deal could happen at a later date, commenting:

“The logic is there and I wouldn’t be surprised if it were to happen — eventually. The joint venture means there is unlikely to be a rival bid which means MGM can take its time and come back when the situation is more favourable.”

Entain’s third largest shareholder, the Edinburgh-based international investment company Aberdeen Standard, is said to have shared the Entain board’s opinion MGM’s bid undervalued the company and its future prospects. Before the approach, Entain’s largest single shareholder was Capital Group, which played both sides of deal by selling half of its 9.9% holding when its market price exceeded the bid offer.

Entain, previously named GVC Holdings is a major online sports betting and gambling/gaming group and owns the Ladbrokes, Coral, Bwin and Sportingbet brands. Having bought Ladbrokes Coral for £3.2 billion in 2018, Entain also now runs the 3000 bricks-and-mortar betting shops that came with that deal.

MGM, meanwhile, is listed in New York and best known for its Las Vegas Strip resorts. As the USA online sports betting market gradually opens up state-by-state, it is pushing into the sector and determined to be a major player. Its in online sports betting in the USA market where it has a joint venture with Entain. The London-listed company has far more experience in the online space, especially in sports betting.

Another development that didn’t help the proposed deal was last week’s surprise resignation of Entain chief executive Shay Segev, just a few months into his role. He accepted an offer to join the sports streaming group Dazn. The Times quotes a source as commenting:

“Shay was the driving force behind the joint venture and was an advocate of the takeover. His resignation was seen as a negative.”

For its part, the Entain board made a statement presumably designed to reassure shareholders that the collapse of the bid is by no means considered a major blow, insisting the company continues to work towards “a clear growth and sustainability strategy, backed by leading technology, that it is confident will deliver significant value for stakeholders”.