The Entain share price has surged by almost 26.5% over the early hours of trading this morning after markets opened for the first time in 2021. The spike came on news Entain, which owns bookmaker Ladbrokes, has received an £8.1 billion takeover offer from Las Vegas casino operator MGM Resorts International. MGM is Entain’s partner on the U.S. market. 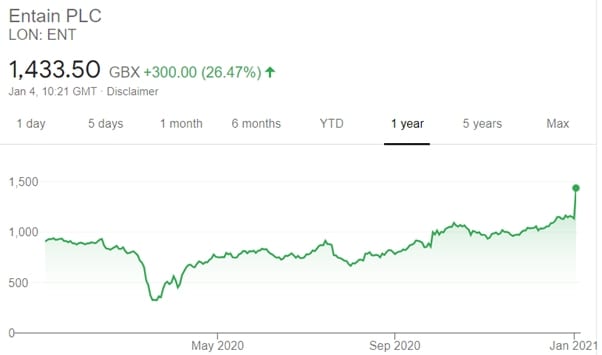 Given the close working relationship between the two companies, it perhaps comes as no surprise Entain, previously known as GVC, appears to have been in backroom discussions with MGM over the offer. Entain this morning informed shareholders that MGM has made several takeover proposals and that its latest represents an all-share offer that values the British company at £13.83-a-share. That represents a 22% premium on the valuation Entain closed 2020 at.

Were Entain to accept MGM’s proposal of 0.6 shares per Entain share, the latter’s investors would end up owning 41.5% of the combined company. MGM has also suggested that there could be a partial cash alternative offer made available to Entain shareholders.

Despite the fact the two companies are partners in the USA, Entain’s board has still told investors to take no action because it feels the current proposal “significantly undervalues the company and its prospects”. The board has also asked that MGM further clarify how it sees the “strategic rationale for a combination of the two companies”.

Entain was founded as Gaming VC Holdings (GVC) in Luxembourg in 2004 and grew quickly through an acquisitions strategy that saw it hoover up a number of online sports betting, casino and other gambling sites, including Bwin and Sportingbet. Its £3.2 billion acquisition of the Ladbrokes Coral Group in 2018 was by far its largest acquisition and also added thousands of traditional bricks-and-mortar betting shops to the company’s portfolio of businesses. Entain now operates across 20 regulated gambling markets and nine U.S. states, via a 50-50 joint venture with MGM. The pair are developing the Bet MGM brand on the North American market.

The U.S. market is currently considered the big international opportunity for online gaming companies after the country opened up the sports betting market by allowing individual states to set their own rules. But online gaming operators in the country do need a local bricks-and-mortar presence to be granted a license by most states.

That’s seen many of the international online experts like Entain team up with local casino operators, who for their part need expertise in the digital arena. A flurry of consolidation moves has also now marked the sector. Caesars Entertainment, the traditional US casino giant, last year agreed to buy William Hill for £2.9 billion, spinning off its UK bricks-and-mortar betting shops business.

Most of the activity is focused on traditional casino operators adding digital expertise and presence. MGM itself last year saw IAC acquire a 12% stake in it to that aim.

News of MGM’s latest bid for Entain was broken in the Wall Street Journal yesterday, with the newspaper also reporting that the U.S. company had also made a rejected $10 billion all-cash offer at the end of last year. Jefferies analysts told investors in a note that they also believe the MGM offer undervalues Entain’s potential. The stockbroking company believes that the current valuation of DraftKings, a US-listed sports betting peer, implies the UK company should be worth £19.75-a-share to its U.S. partner.