Aston Martin Lagonda’s share price has soared by over 21% today on a dramatic day at the imperilled luxury sport scar maker. Canadian Formula One tycoon Lawrence Stroll has stepped forward as the head of a consortium that has agreed to fund a £200 million of a £500 million rights issue that will save the 107-year old brand from falling into bankruptcy for the eighth time.

However, the rescue package was by far the only announcement to come out of the company on one of the most action-packed days in its long, chequered history. The sports car maker also informed investors of:

The £200 million consortium led by Mr Stroll is made up of several of the businessman’s billionaire friends and business partners, including Lord Bamford, the JCB billionaire. Investindustrial, the private equity company that is Aston Martin Lagonda’s majority shareholder and a Kuwaiti sovereign wealth fund will also contribute £300 million to the total £500 million rights issue. Investindustrial is underwriting the issue. 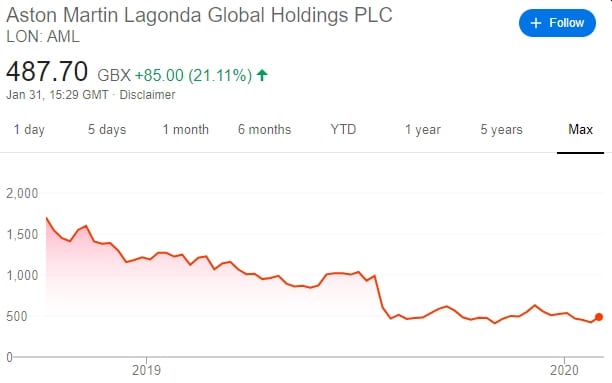 It seems as though the rescue came in the nick of time with Aston Martin today admitting the cash flow crunch it had faced had been putting “severe pressure on liquidity exacerbated by the current high leverage”.

The company had essentially run out of cash and lenders had been closing in, demanding up to 15% interest on some of the debt, which had snowballed to nearly £900 million. The debt pile was the result of the company overstretching itself with the construction of its new St. Athan plant in south Wales. The facility was built to produce the new £158,000 Aston Martin DBX 4×4. Output is planned to double to up to 10,000 of the vehicles a year.

Unfortunately, that ramp up in capacity coincided with sales of cars built at the Warwickshire Gaydon plant sliding 10% last year to just 5809, many of which were sold or leased at a discount after stocks had started to build up. CEO Andy Palmer explained today, while detailing the extent of the company’s financial problems:

“Sales were not enough to offset the cost of preparations for the DBX.”

Mr Stroll’s wealth comes from building the Tommy Hilfiger and Michael Kors fashion brands and he describes himself as “a builder of brands”. Around £150 million of the £200 million being injected by his consortium is believed to be coming from Mr Stroll himself. He’s is a known auto enthusiast and owns a fleet of Ferraris, Aston Martins and other sports car. He described his latest investment as a brand that is “a jewel the needs a bit of polishing”.

Without a trade deal Britain could lose up...

Stock futures up after worst two-day slide in...

Is The Coronavirus Stock Market Slump A Buying...

New Twist To Anglo Bid For Sirius As...