The Meta share price dropped by 4% yesterday, wiping billions off the value of the new holding company that owns Facebook, after the social media giant was ordered to unwind its acquisition of Giphy by the UK’s Competition and Markets Authority (CMA). Meta, then Facebook, acquired the GIF app Giphy for an estimated $400 million in May.

However, the CMA reached the conclusion that the acquisition could hurt competition because Facebook could restrict the access of other platforms to Giphy to boost its own websites and apps. The UK regulator also judged that as a stand-alone company, Giphy’s advertising services, which Facebook terminated following the acquisition, would have encouraged greater market innovation. 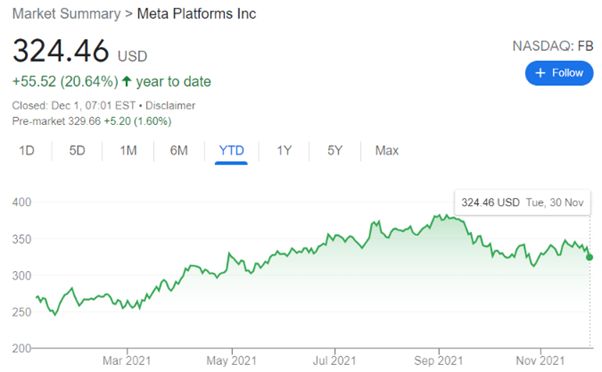 Meta responded to the order yesterday by saying it was reviewing the ruling and “considering all options”, including appeal. The U.S. tech giant argues Giphy and its users are “better off”, as a result of its ownership of Giphy. There has also been speculation Facebook may choose to challenge the CMA’s jurisdiction and authority to rule on the acquisition.

Founded in 2004, Meta was known as Facebook until last month when the company changed its name to, said founder and chief executive Mark Zuckerberg, better reflect its increasingly diverse nature and future ambitions to become a major player in the “metaverse”. Zuckerberg sees the future of the internet as the metaverse, an immersive experience involving augmented and virtual reality. And he wants Facebook to be one of the early drivers of the next generation online world.

As well as the Facebook social media platform, Meta also owns WhatsApp and Instagram. Regulators are concerned the combination of the three apps gives Facebook a practical monopoly over much of the social media space, a position the acquisition of Giphy, at least according to the CMA, reinforced.

Giphy was founded in 2013 and the New York based business offers a search engine of the short, looping animations knowns as gifs. It is integrated across a number of popular social media and chat apps including TikTok, Twitter, Tinder and Slack. Its biggest rival is Tenor, owned by Google. Around 700 million people a day view gifs served by Giphy.

The CMA has had a running battle with Facebook over its Giphy acquisition and fined the company, then Facebook, £50 million in October for what it said was a “deliberate”, failure to comply with its initial for twice failing to change its chief compliance officer without first seeking approval.

Stuart McIntosh, who is chair of the CMA committee investigating the deal commented:

“The tie-up between Facebook and Giphy has already removed a potential challenger in the display advertising market. Without action, it will also allow Facebook to increase its significant market power in social media even further, through controlling competitors’ access to Giphy gifs.”

“By requiring Facebook to sell Giphy, we are protecting millions of social media users and promoting competition and innovation in digital advertising.”

Meta’s response to the ruling, delivered yesterday through a spokeswoman, was:

“Both consumers and Giphy are better off with the support of our infrastructure, talent, and resources. Together, Meta and Giphy would enhance Giphy’s product for the millions of people, businesses, developers and API partners in the UK and around the world who use Giphy every day, providing more choices for everyone.”

It remains to be seen if other international regulators now move to back the CMA up or if Meta will take an aggressive stance and challenge its authority to order it unwind the deal for Giphy.