The Facebook share price yesterday rose by 4.19%, driving the social media company’s market capitalisation to above $1 trillion for the first time. The gains came after a federal judge hearing an antitrust lawsuit brought against Facebook by the Federal Trade Commission said the regulator’s action was “legally insufficient”. 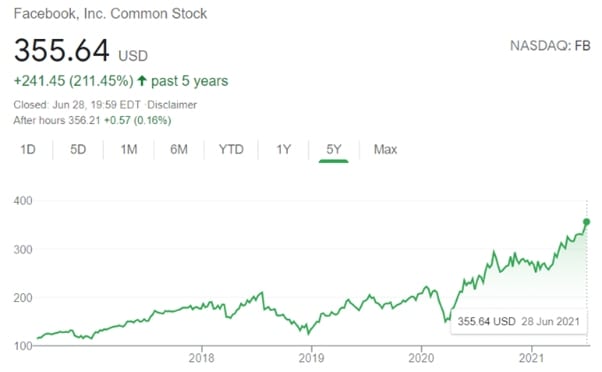 Judge James Boasberg of the District Court of Columbia through the claim out with an explanation that suggested the Commission’s case had been lazily constructed. He wrote of the decision:

“The FTC’s complaint says almost nothing concrete on the key question of how much power Facebook actually had, and still has, in a properly defined anti-trust product market. It is almost as if the agency expects the court to simply nod to the conventional wisdom that Facebook is a monopolist.”

“Although the court does not agree with all of Facebook’s contentions here, it ultimately concurs that the agency’s complaint is legally insufficient and must therefore be dismissed.”

Another lawsuit brought against Facebook in December by several U.S. states claiming the company’s acquisitions of chat app WhatsApp and photo sharing social media Instagram was also dismissed by the judge. This time for the reason it was too late to challenge acquisitions made years ago. Facebook acquired Instagram in 2012 and WhatsApp in 2014.

Investors reacted to the rulings by driving the Facebook share price up $14.27 to $355.64. That took the company’s total value to $1.01 million. Facebook now joins an elite group of giant tech companies to reach a valuation of over $1 trillion. Apple is the most valuable company in the world with a market capitalisation of $2.3 trillion, followed by Microsoft at $2 trillion and Amazon at $1.7 trillion.

The only non-tech company to reach a $1 trillion valuation has been the Saudi Arabia state oil company Saudi Aramco.

The court didn’t, however, accept Facebook’s assertion the regulator had no jurisdiction to take legal action against its acquisitions of Instagram and WhatsApp. The judge left the door open by telling the FTC is could still try to force the divestiture of the two companies if it succeeded to legally argue Facebook has monopoly power in the social media market. A new complaint should be filed by July 29th if the regulator wishes to further pursue the case.

“We compete fairly every day to earn people’s time and attention and will continue to deliver great products for the people and businesses that use our services.”