The lockdown periods over the past 14 months may have devastated businesses that rely on the physical presence of customers but it has proven a boost for others – especially companies that earn their money online. The move into a more digital world has certainly been a boon for social media company Facebook, which yesterday reported a 48% increase in total revenue over the most recent quarter. That saw the company’s profits almost double.

Markets cheered the surge in revenues and profits, which breezed past analysts forecasts, by sending the Facebook share price up over 6% in after-hours trading. That will almost certainly see the company’s stock open at an all-time high today when the Wall Street trading session starts this afternoon. 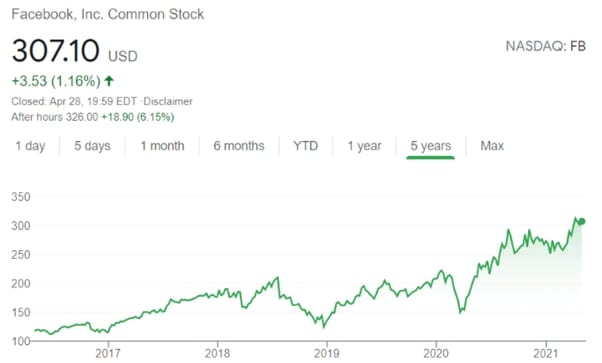 Facebook earned a total $26.17 billion over the first three months of 2021, which translated into a net income of $9.5 billion – a 94% increase on the same quarter a year earlier. The share price gains realised in after-hours trading could well have been even higher if the company hadn’t warned new privacy controls introduced with Apple’s most recent operating system update will start to hit its digital advertising business over coming months.

“We had a strong quarter as we helped people stay connected and businesses grow. We will continue to invest aggressively to deliver new and meaningful experiences for years to come, including in newer areas like augmented and virtual reality, commerce, and the creator economy.”

Of the impact of Apple’s new privacy rules, Facebook told investors it expected revenue growth to remain stable over the current quarter but “significantly decelerate”, as the effect is felt as the year progresses. Apple’s latest operating system update makes it harder for third-party apps to track user behaviour online.

However, not everybody shares Facebook’s scepticism of how much Apple’s move will hurt the company’s advertising revenues. Media agency Mindshare Worldwide’s Tom Johnson comments the new Apple privacy controls won’t only not “slow Facebook down”, but could even help it keep growing revenues. The company, says Mr Johnson, has its own user data profiles advertisers can use across Facebook, Instagram and WhatsApp to target consumers.

The Nasdaq dropped 1.9%, while the yield on 10-year Treasury notes dropped to 1.557%... END_OF_DOCUMENT_TOKEN_TO_BE_REPLACED

The dollar’s received a further boost as the Nasdaq dropped more than 2%, the... END_OF_DOCUMENT_TOKEN_TO_BE_REPLACED