The 2005-founded premium British mixers maker FeverTree has seen its share price gain 1.2% in early trading today on news the brand has taken top spot for market share in the USA. Having been the most popular mixer sold in the UK since late 2017, FeverTree has now also overtaken its 239-year-old rival brand Schweppes on the U.S. market.

Market data company Nielsen says FeverTree grew its share of the American market from 15% to 26% over the past two years. That’s the overall market for tonic, not simply premium tonic. Taking top spot from a brand that was founded in 1783 is another milestone vindicating the vision of FeverTree founders Charles Rolls, former managing director or Plymouth Gin, and Tim Warrillow, the marketing expert he teamed up with in 2005. 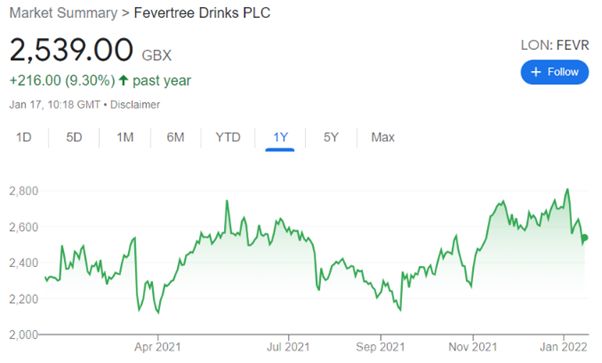 Rolls spotted a gap in the market for a premium tonic as gin boomed in popularity as a drink. The market was suddenly awash with new brands and varieties of premium craft gins. Dedicated gin bars were also suddenly sprouting up. But drinkers were generally still mixing their premium gin with standard tonic. Mainly, as it turns out, because the market was not offering a viable alternative.

FeverTree, which has since branched out into a range of luxury mixers including ginger beer for Moscow Mules, two “posh colas” to accompany rum, whiskies and bourbons and a sparkling pink grapefruit designed to be mixed with premium tequilas. Last September the company also became the market leading ginger beer brand sold in the USA.

The figures published by Nielsen are for “off trade” products sold via supermarkets and other retailers rather than those sold via bars and restaurants, for which reliable data is harder to track down. However, analysts are confident FeverTree’s “on-trade” growth roughly mirrors its off trade performance.

“Becoming the No 1 tonic brand in the US is a hugely significant milestone for Fever-Tree. It demonstrates the continued success of our pioneering approach to taste and quality of ingredients.”

Schweppes, owned by the U.S. drinks giant Keurig Dr Pepper, which also owns brands including 7UP, Canada Dry and Sunkist, belatedly moved to fight back with the launch of its own premium tonic, Schweppes 1783, after being overtaken by FeverTree on the UK market a few years ago.

However, in late 2020, two years after its launch, the product was discreetly pulled. A new premium range of mixers, launched under the Schweppes Signature Collection has seen been released to some more success but there is a distinct feeling the established brand is now playing catch-up to its far younger challenger.

In the UK, Nielsen measures the mixers market as a whole rather than breaking it down by product. On its home market, FeverTree’s premium pricing has seen it establish a solid gap over Schweppes for the value of its sales. However, it still trails the latter on unit sales volumes.

One if Schweppes’ difficulties in responding to the new competition represented by FeverTree is the fact that that the brand is owned by different companies in different geographies. In the USA it is, as mentioned, owned by Keurig Dr Pepper. But in the UK and several other European countries it is distributed by Coco-Cola. Elsewhere in Europe the brand is owned by the Japanese group Suntory and another Japanese company, Asahi, owns Schweppes in Australia. A further company, Swire, hold the brand’s rights for China, Hong Kong and Taiwan.

The FeverTree share price is up 9.3% for the past 12 months.