Fidelity Investments, the USA’s largest provider of retirement plans, has announced it is to start allowing investors to add bitcoin to their accounts. Fidelity, which also has 1 million customers in the UK, has said the move is a response to growing demand and will become the first mainstream investments provider to do so.

However, despite the fact the move can be considered evidence of bitcoin’s increasing proximity to mainstream financial markets its price has dipped by over 2% in the past 24 hours to $38,955.5. A single bitcoin was worth over $68,000 as recently as November but its exchange price has suffered alongside growth stocks as investor sentiment has soured towards riskier assets. 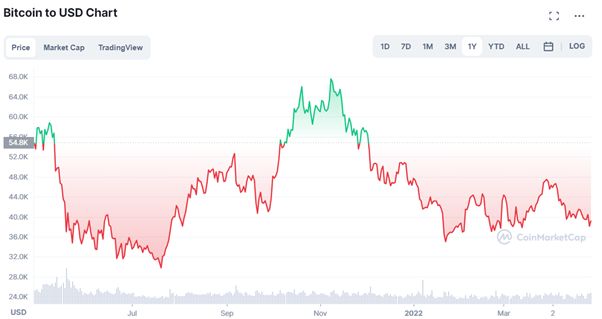 Fidelity’s move might be considered surprising against a backdrop of rising regulatory concern over how exposed investors are to volatile cryptocurrencies and other digital assets. Last month U.S. officials told retirement plan trustees to “exercise extreme care” when considering investing in cryptocurrencies.

However, the thousands of companies in the USA that use Fidelity to administer their retirement plans will now be able to put bitcoin on their lists of investable assets. Fidelity will cap exposure to bitcoin at 20% of retirement plans and there are reportedly no current plans to include any other cryptocurrencies on the list.

Fidelity is one of the world’s biggest investment managers with $11.3 trillion in assets under management. It runs retirement plans and other employee benefit programmes for over 23,000 companies. American customers with 401(k) retirement plans will be able to add bitcoin to their accounts from today and employers will be able to offer staff the option to invest in bitcoin via their plans.

Dave Gray, head of workplace retirement offerings and platforms at Fidelity, commented on the move:

“As a leader in digital assets we are thrilled to be the first to offer employers exposure to bitcoin for the core line-up of 401(k)s that reflects our commitment to meeting their evolving needs and our belief in the promise of blockchain technology for the financial industry’s future.”

“There is growing interest from plan sponsors for vehicles that enable them to provide their employees access to digital assets in defined contribution plans, and in turn from individuals with an appetite to incorporate cryptocurrencies into their long-term investment strategies.”

Fidelity has been dabbling in cryptocurrencies for almost 10 years already and started to mine the cryptocurrency as an experiment in 2014. Mining is the process of using powerful computers to solve the cryptographic puzzles that underpin the blockchain technology that bitcoin and other cryptocurrencies run on. It is rewarded by the allocation of freshly minted bitcoin. In 2018 the asset manager also launched a platform for institutional investors to trade digital assets.

Nasdaq-listed software and technology group MicroStrategy has already said it plans to sign up to the new Fidelity initiative, giving its employees the opportunity to invest in bitcoin as past of its 401(k) retirement plans programme.