Global stock markets, including the FTSE 100, returned gains yesterday on hopes that a Covid-19 vaccine could potentially be available before the end of 2020. The positive momentum has been sustained today, with the finance sector leading the way. Banking stocks have been boosted by improving bond yield rates and asset manager and insurer M&G saw its share price boosted after announcing an interim dividend in line with analyst expectations. 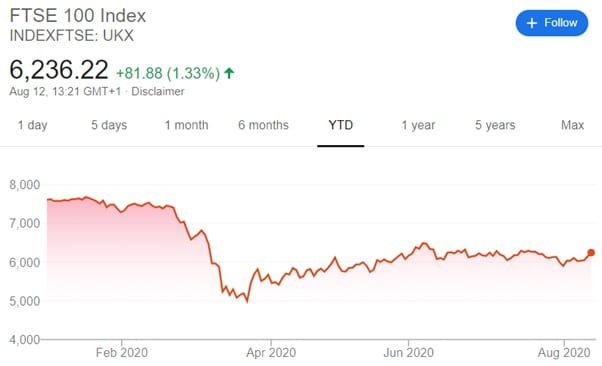 The more domestically focused FTSE 250 was only slightly behind yesterday with a 1.5% return of its own. Unlike its sister index, however, that momentum has not been sustained today and the FTSE 250 is slightly down by 0.13% into the early afternoon. Yesterday’s gains can be largely attributed to talk of additional quantitative easing by the Bank of England, which committed to further support for the economy if required.

The FTSE 100 still sits around 17% of its early year peak but has recovered by around 25% from its March bottom, following the coronavirus pandemic sell-off. Travel stocks led yesterday’s gains for the benchmark index after package holiday group Tui’s share price gained 9.7% and British Airways owner IAG 8.4%.

Elsewhere, Wall Street didn’t fare quite so well later in the day thanks to a late sell-off. Major U.S. indices had been on track to hit new record highs, having recovered all of their losses from the pandemic sell-off. However, that was scuppered by reports of stalling progress in talks on additional stimulus from the Federal Reserve setting off investor nerves.

Elsewhere in Europe, France’s CAC 40 benchmark index closed up 2.4% yesterday, with Germany’s Dax 30 not far behind with a 2% gain. In Asia, Shanghai’s Hang Seng closed 2% to the good and Japan’s Nikkei 1.9%. Gold prices dropped by 5.2% to fall below $2000 oz. again as investor confidence encouraged them to take more risk and reallocate capital to stock markets. Silver prices slumped by as much as 12.9%.

Today’s gains for the FTSE 100 were being led by asset manager and insurer M&G, whose share price was up by 4.3% this morning despite posting results that showed underlying profits had halved over the first six months of the year.

Confirmation that an interim dividend of 6p per share, the equivalent of a 10% yield, would be paid out encouraged investors into the stock. Those gains have, however, largely fallen away as the day progresses and now sit at just 0.6%. 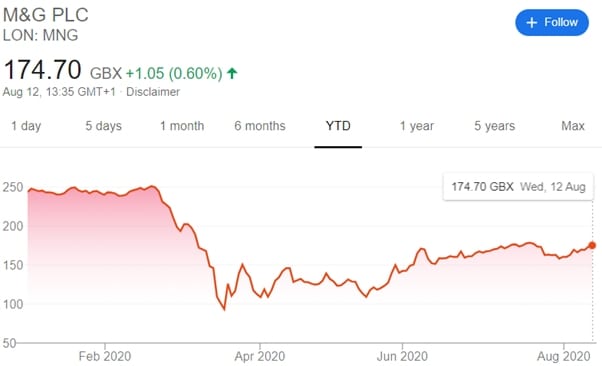 Bond yields rising, which boosts banks as it makes it easier for them to generate a profits, saw the HSBC share price up by over 3% this morning. Nat West Group, formerly RBS, is up by over 2% into the afternoon session, Lloyds 1.6% and Barclays 0.5%.