The Flutter share price has gained 2.5% in morning trading today after the FTSE 100 online gambling group announced the £1.6 billion acquisition of Sisal, a leading Italian betting, online gaming and lottery operator. The market has reacted well to the agreement with analysts at the investment bank Jefferies calling the price tag “attractive for a market-leading position in Italy and further exposure to fast-growing regulated markets”. 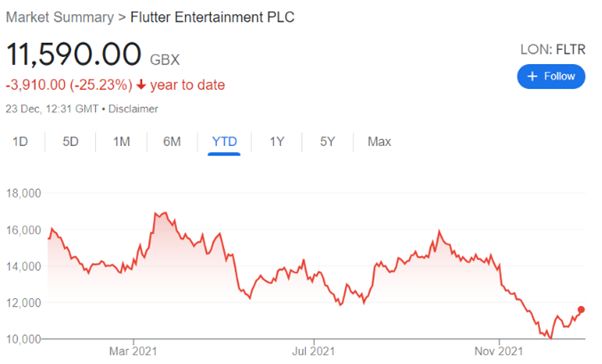 Flutter was formed in 2016 through a merger between Paddy Power and Betfair. It now owns a number of other brands including PokerStars and the Sky Bet brands as well as a the U.S. sports betting brand Fanduel and Sportsbet, which has an over 50% market share of online sports betting in Australia. As well as its online business, which generates the majority of Flutter’s revenues, it also owns and runs 620 bookmaking shops in the UK and Ireland.

The deal for Sisal, which Flutter is acquiring from the private equity firm CVC, which had been considering a public listing of the business in Milan, expands the company’s presence in continental Europe. The deal is expected to complete at some point during the second quarter of 2022, regulatory approval permitting.

Sisal generates most of its revenues in Italy where it runs the SuperEnalotto lottery, the chain of Matchpoint betting shops and an 11.9% share of the country’s online gambling market. It also runs lotteries in Turkey and Morocco, is one of the bidders for the UK lottery and has a presence in Spain.

“For some time we have wanted to pursue this market opportunity via an omni-channel strategy and this acquisition will ideally position us to do so.”

Combined with the Italian businesses of its existing PokerStars and Betfair brands, the deal will give the company a 20% share of Italy’s online gambling market and facilitate further diversification of Flutter’s assets.