Food and sweet treats never go out of fashion even in a recession: 3 steady stocks to take advantage

Inflation is soaring, reaching 8.2% over the 12 months to June with price rises led by energy and fuel, materials and foodstuffs. An already increasingly problematic inflation trend was magnified by Russia’s invasion of Ukraine earlier this year and the continuing war is disrupting oil and especially gas supplies as well as those of the wheat and other grain crops both countries are major global exporters of.

Interest rates are also rising with central banks including the Bank of England and the Federal Reserve making steady hikes this year in an effort to bring inflation, which is tipped to hit 11%, under control. The combination of a quickly rising cost of living and the cost of borrowing starting to return to historic norms after more than a decade at and around record low levels means a period of recession is now considered more likely than the chances of avoiding one.

It all adds up to consumers having less expendable income than they have had for years and the situation is expected to deteriorate with inflation expected to remain at elevated levels deep into 2023 if not longer. Analyst consensus is that higher levels of household savings built up during the Covid-19 pandemic have helped cushion the blow of runaway inflation so far.

But as savings dwindle belts are starting to tighten. Economic data over the past few months shows UK retail spending is contracting, by 0.8% in May and 0.1% in June. June’s figure was boosted by a 3.1% rise in food sales with groceries companies putting the strong month down to shopping for the Queen’s Jubilee celebrations.

Groceries shopping is not, however, escaping the cost of living crisis entirely with evidence suggesting consumers are limiting their shopping baskets with luxury items taking the greatest hit. In May, food sales volumes were down 1.6% on the year earlier and 2.4% below pre-pandemic levels. 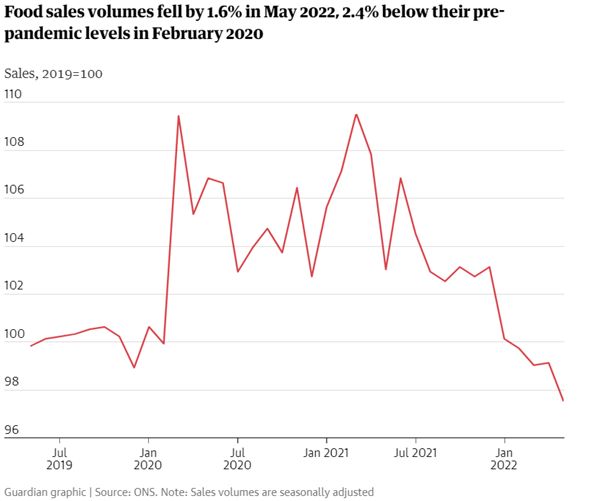 But while shoppers might go for a slightly cheaper bottle of wine for Friday night or choose less expensive olives from the deli, basic food staples are one thing that tends to hold up best during a recession or when consumer sentiment turns negative. Which is why investors looking to tweak portfolios often turn to consumer goods companies when the going gets rough.

The biggest consumer goods companies focus their brand stables on mass market products which means the food and household staples they sell tend to be budget-friendly. Even their more premium brands are typically sold at a price point that makes them accessible to the average household.

These three companies are never going to offer the kind of returns that get investors excited but that’s not necessarily a bad thing. They have all offered investors solid returns and growing dividends over their recent histories and should hold up better than most stocks that rely on discretionary consumer spending over the period ahead. And longer term, these are the kind of reliable, income-earning stocks that can act as cornerstones for a diversified equities portfolio.

Let’s look at each in some more detail. 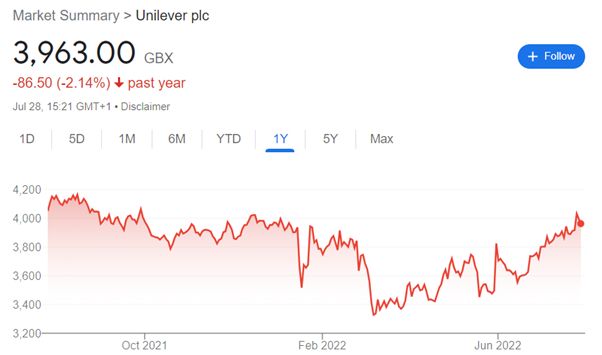 Unilever is the biggest London-listed consumer goods group and one of the world’s biggest. Its stable of brands includes sweet summer treats like Magnum ice creams and Solero fruit sorbets, sales of which will have been boosted by the recent heatwave. It also sells Hellman’s mayonnaise, Knorr stock cubes and household essentials like the Dove soap brand and Domestos among over 400 brands, 13 of which brought in more than $1 billion in sales each in 2021.

This week the Unilever share price rose 2.5% in Tuesday morning trading after it published a quarterly earnings report that pleased investors. As did the company raising sales forecast thanks to increasing the prices of its products to offset higher costs. Across its brands, Unilever said prices were up 9.8% over the first half of 2022 compared to the same period a year earlier. Second quarter prices were up 11.2%, keeping them ahead of inflation.

But what is Unilever’s long-term outlook? The company has been criticised in recent months by major investors including Terry Smith and Nick Train, two of the UK’s most successful fund managers. Smith accused the company of “trying too hard to display its sustainability credentials instead of focussing on running the business” and improving shareholder returns.

Some analysts believe the company has also grown too big and managing over 4000 brands makes it slow to react and less entrepreneurial than smaller rivals. But the negatives also suggest room for improvement which could make the current £100.42 billion valuation attractive and offer potential upside. A dividend return of 3.64% at the current share price is also not to be sniffed at.

Analyst price targets indicate a belief that the Unilever share price is seen as likely to make gains over the next twelve months with the 23 analysts polled by the Wall Street Journal setting an average target of £50.30 compared to the current £39.72. 11 of the analysts rate the stock as a hold with 7 rating it a buy, 2 overweight and just 3 a sell.

It’s not a stock that will get anyone salivating but looks a solid near-term option under current economic conditions, has reasonable potential upside, offers a good dividend and should provide reliable returns longer term. 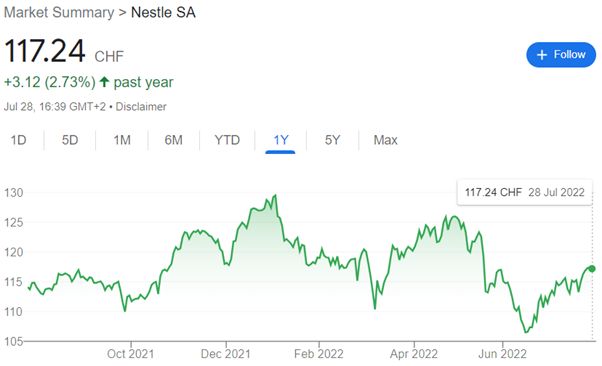 Switzerland’s Nestlé is the world’s biggest consumer goods company, worth CHF322.41 billion (£277.93 billion) and sells brands including Nescafe, Nespresso, Häagen-Dazs ice cream, Cheerios, Maggi, KitKat and Smarties. The company currently offers a dividend yield of 2.39% and a gross profit margin of 48% provides a return on investment of 9.4% and grounds for optimism dividends might continue to rise by their five-year average of 4% a year.

This week Nestle followed the positive trend of strong results for consumer goods groups when it revealed that steep price increases to offset rising input costs had bolstered sales during its second quarter. The Kit Kat maker said it had managed to maintain a 17% margin and it was yet to see any big fall in demand from rising prices. It raised its full year sales growth forecast to 7-8%.

Of 25 analyts setting price targets for Nestle polled by the WSJ, 12 rate the stock a buy at its current valuation and another 3 as overweight with 8 recommending it as a hold. Only 1 analysts each has Nestle as underweight and a sell. The average 12 month price target for the company is CHF131.79 compared to the current share price of CHF122.25. That has to represent solid potential upside in the context of current market conditions. 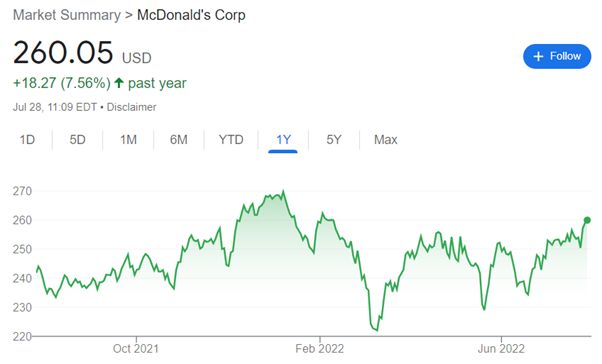 The world’s biggest fast food brand may have just raised the price of a cheeseburger for the first time in 14 years but it still offers the cheapest prices for a quick bite to eat on the high street. And while it may take some flack for the nutritional quality of the meals it offers, and some wouldn’t be seen dead in one of its restaurants, McDonald’s benefits from enduring popularity. That’s unlikely to change anytime soon, especially during a cost-of-living crisis hitting lower-income households hardest.

McDonald’s shares also yield 2.2% in dividends and the company has increased shareholders’ income every year, without fail, since 1976. When the company reported fiscal 2022 second-quarter earnings on July 26 it showed comparable store sales, which exclude the impact of store openings and closings, jumped by 9.7%.

A negative has been the divestiture of McDonald’s Russian business which represented 2% of systemwide sales, 7% of revenue, and 2% of operating income. The positive is that rising prices don’t seem to be putting off customers, likely because rivals have made larger hikes. Trading at a price-to-earnings ratio of 27, McDonald’s shares are also reasonably priced.

That’s reflected in 20 of the 34 analysts polled by the Wall Street Journal rating McDonald’s as a buy, 4 as overweight and 10 a hold with none rating it as underweight or a sell. The average analyst price target for the stock is $281.29 compared to the current level of $258.89.

Every portfolio needs its reliable, steady cornerstones but these stocks are particularly important during periods we are currently experiencing. But all three of the stocks covered also represent solid potential for upside and dividend income.