Founder Alex Chesterman yesterday blamed “irrational fear” for the dramatic tumble in the market capitalisation of British online used car retailer Cazoo since its listing last summer. Yesterday’s 13% slide took the Nasdaq-listed start-up’s fall in valuation since it floated via a reverse merger with a Spac (special purpose acquisition company) to 83%. Another 3% slide in early trading today has extended that to 86.5%.

However, Mr Chesterman, a serial entrepreneur who also founded the property portal Zoopla and LoveFilm (an early DVD-by-post and content streaming start-up sold to Amazon for £200 million) is adamant the company’s valuation woes are arbitrary and the result of investor panic. 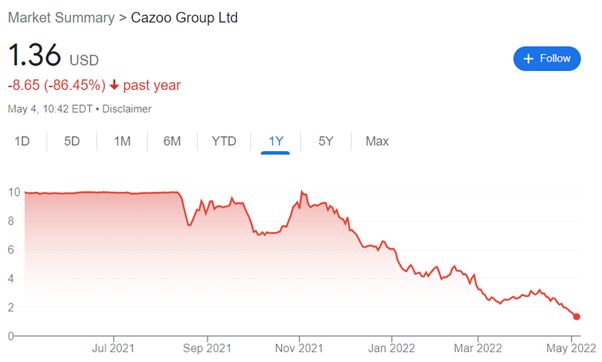 As the company reported revenue growth of 159% to £295 million over the three months to March, Chesterman said the share price plunge was the result of “nothing Cazoo specific”. He suggested market sentiment had simply shifted since Cazoo agreed the reverse merger that last year valued it at $8 billion, stating:

“I can give you a lot of names that have been hit harder than we have. That is just the nature of investors’ views around high growth and risk today, versus some point in the past or the future.”

Gross profit fell from £4 million to £2 million compared to last year as a result of higher advertising spend but Cazoo sold 19,713 vehicles, representing 102% year-to-year growth for the quarter.

Cazoo, which buys second-hand cars, reconditions them and then resells them online, delivering them to the buyer’s home, was only launched in late 2019. However, it already employs 3500 staff and last year convinced the NYSE-listed Spac AJAX I, established by billionaire Dan Och, to value it at $8 billion, providing a $1 billion cash injection.

Cazoo also took over the Spac’s NYSE listing through the reverse merger to become a publicly traded company in late August last year. Its valuation is now just over $1 billion. Chesterfield, however, remains confident and yesterday stated he did not “at all” regret taking the company public.

“always tends to swing too far in one direction or the other. I think last year there was a bit too much of the irrational exuberance in some of these hi-tech names. And I think today the opposite is the case.”

He said Cazoo is performing “in line or better than others” in the sector. Yesterday the share price of Carvana, the larger American used car retailer Cazoo’s own model is based on, was also down 5.3% and like its British peers it has lost about 75% of its value this year.

Cazoo is focused on European expansion and last year launched in France and Germany. There are plans to move into Spain and Italy, where it bought the Italian online car retailer BrumBrum in January for €80 million, this summer.