It would be naïve to think we’re out of the woods just yet but as the UK government begins to ease lockdown, there is some hope the end of the worst phase of the Covid-19 pandemic is in sight. Just how badly the hit to the economy over March, April and May will turn out to be over the medium to longer term is still a question that is difficult to answer. But the economy will start slowly coming back to life. 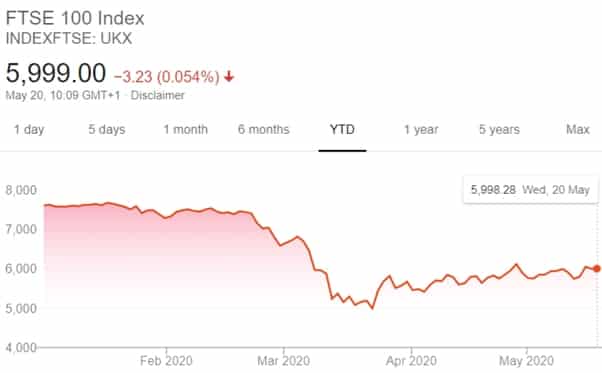 And as it does, there must also be hope that the stock market will, even if more turbulence is expected before smooth open waters are reached, continue its rally from the late March depths of the sell-off.

Prime Minister Boris Johnston is back at work after his own close encounter with the coronavirus. And while that means he may well be more cautious in easing the lockdown than may have been the case if he hadn’t himself been infected by Covid-19, among the most important of his current challenges are calls on which social distancing restrictions to ease when.

The UK also doesn’t look like it will all move in lockstep, with Scotland, Wales and Northern Ireland choosing to retain tougher social distancing rules for longer. But from here on in, we can expect gradual easing and a step-by-step return to something approaching normality.

It remains to be seen just how deeply wounded the UK and international economies are. But however long the path to full recovery may be, it starts now.

Those investing regularly online into ISA, SIPPs and other investment accounts also have some tricky judgement calls to make in the weeks ahead. What are the early signals around the post-Covid-19 era that investors should pay close attention to?

Are Defensive Stocks A Safe Port In The Storm?

With a recession ahead, the only question is how long it will last and how deep it might prove, investors may well feel naturally inclined towards more defensive stocks. For example, companies in sectors such as consumer staples and utilities. No matter what happens we all still have to eat, power and warm our homes and put fuel in our vehicles, right?

To an extent yes. But that doesn’t mean there won’t be any changes to consumer behaviour or that traditional defensive sectors and stocks will not also face their own challenges as a result of the economic maelstrom we are in the midst of. Consumer staples giant Unilever, which owns household brands including Hellman’s, PG Tips, Flora and Pot Noodle, among hundreds of others, last month said it is “preparing for lasting changes in consumer behaviour”.

For Unilever, and other major consumer staples companies such as P&G and Nestle, the evidence so far is that the Covid-19 pandemic is neither a positive nor a negative. Some products, like ice cream and its non-domestic food business that sells to caterers and wholesalers have seen a slump in sales figures. Others, like disinfectant brands, have seen sales soar.

The net result so far, however, has been for lines that are up and down to even themselves out. Over the first quarter of the year to the end of March, Unilever’s underlying revenues were, at €12.4bn (£10.9bn), exactly the same as they were the year before.

That may come as a surprise to Brits who have seen lines of people walking out of supermarkets with bulging shopping trolleys. Especially during the earlier stages of lockdown. And indeed, Unilever’s sales in developed economies have been up 2.8%. But that has been evened up by a 1.8% drop in sales in emerging markets.

The company’s best performing division over the past weeks has been home care. People are both at home more and extra hygiene conscious. That’s seen purchases of cleaning products like the Cif and Domestos brands go through the roof, boosting division sales by 2.4%. Alan Jope, Unilever’s chief executive, expects strong sales of hygiene products to continue as a trend even after the immediate crisis has passed, as consumers aim for higher standards of home and personal hygiene.

Unilever has also been one of a minority of big FTSE 100 companies to maintain its dividend, suggesting there is some shelter to be had in the arms of ‘defensive’ consumer staples stocks. With Unilever’s share price still hit by the general market sell-off and down almost 14% on its February high, despite revenues holding up, there could also be some capital gains upside, in addition to reliable income, from shares in the company. 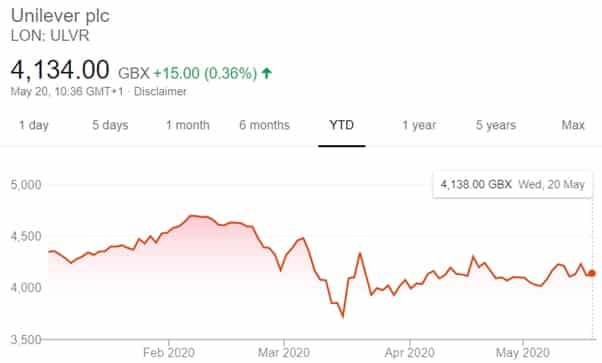 Many analysts remain cautious on Unilever’s longer-term prospects, despite the company looking like a safe bet under current market conditions. The company’s share price lost around 14% between August 2019 and early 2020 and it missed its underlying sales growth target for 2019. It came in at 2.9% against forward guidance for between 3% and 5%. Sales growth for 2020 was forecast for the lower end of the company’s multi-year 3%-5% range.

Nestlé, another consumer staples giant and listed on Zurich’s SIX Swiss Exchange, is doing even better than its British peer, less than 4% off its own February high. Unlike Unilever, emerging markets have not cancelled out revenue growth in developed markets, with the Americas, European, North African and Middle East geographies all performing well. The company’s first quarter results to the end of March showed revenue growth of 4.3% over the period, compared to the same three months last year. 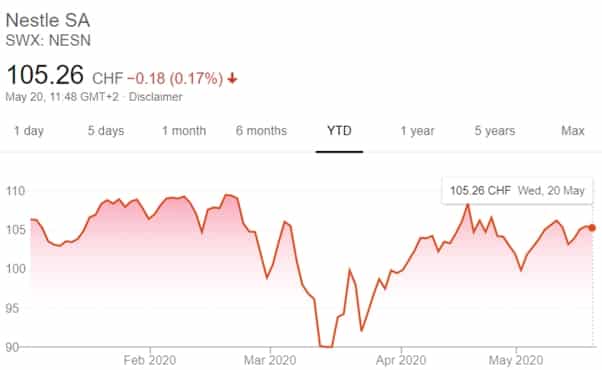 Sales in North America were a particular highlight, with upper single digit growth. Pet products, baking ingredients and beverages were the biggest contributors to growth, alongside frozen food.

Also, unlike Unilever, which withdrew forward guidance for 2020 because the company said it did not feel able to “reliably assess the impact [of Covid-19] across our markets”, Nestlé has held its original guidance for the year. The company did add the get-out-clause that it remains to be seen how much of an impact the longer-term economic fallout of the lockdown period will have on its various international markets.

Utilities such as electricity, gas and water companies are also usually a traditional refuge during stock market and economic downturns. However, they may be best avoided this time around. Most are seeing revenues drop as an increase in domestic bills has not been enough to offset drastic falls in bills of office buildings and other large professional, social and public spaces.

Neither income from dividends or capital growth can be relied upon for many, but some utilities may be exceptions. Many analysts like Pennon, the Exeter-based water utility and waste management company that is a constituent of the FTSE 100. It recently obtained what now looks an especially good price for waste management business Viridor. That windfall means the company’s cash position is strong and it is likely to use the proceeds of the sale to both pay down debts and return cash to shareholders.

What about supermarkets? If consumer staples are doing well, it might be presumed that at least some supermarket stocks might be worth a look too?

While supermarkets have warned investors the additional expenses they have incurred maintaining social distancing and other rules are balancing out increased revenues, which they also caution are returning to normal, some do look well placed.

Tesco, in particular, could be worth a look. Aside from potentially higher sales over March to May, the company’s finances are generally in good shape. And a major cash injection will result from the sale of its Asian division when, barring unexpected events, it goes through later this year. A £5 billion special dividend will be paid out to shareholders once the cash has been banked.

Groceries home delivery and warehouse automation technology specialist Ocado is another company that might be expected to do well from the Covid-19 pandemic, despite admitting last month it didn’t have the capacity to deal with the surge in demand for deliveries in the UK.

But Ocado’s share price is now far more influenced by its warehouse automation technologies division, where most investors see its future. The company was already doing very well there, with its share price rising last year on the back of contracts with major international supermarket chains. Home delivery of groceries is expected to see a significant jump in demand, with an already strong trend accelerated by the coronavirus pandemic.

More shoppers preferring to avoid crowded supermarkets and instead placing delivery orders online is expected to continue after the immediate crisis is over, and Ocado’s warehouse technology division stands to benefit. 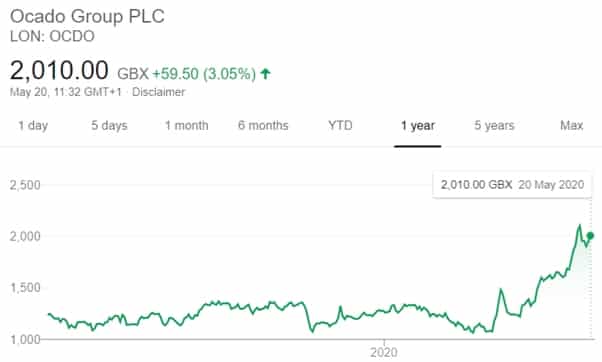 The Ocado share price is already up a whopping 60% for the year-to-date and while there is an argument it is a rare stock currently overheating, the company’s long term prospects do look solid.

With so many stocks having taken a battering over the past couple of months, value investors will also be optimistic of sniffing out bargains with strong recovery potential. Travel companies have been particularly badly hit but with the aviation sector expected to take longer to recover than trains and buses, companies like bus routes operator National Express could have good rebound potential.

The company was attracting the attention of value investors before the pandemic hit and is down 55% since February.

Despite its recent troubles and an uncertain outlook for airlines over the next couple of years, easyJet, along with Ryanair might also be worth keeping an eye on, even if it may be better to hold off in the short term. While it comes with a risk of missing out on some gains, more clarity on social distancing requirements and quarantine rules between European countries would be good to have before investors consider taking the plunge.

Emerging Technologies That Could Benefit From The Move Online?

Companies in the cloud technology and ecommerce spaces are also expected to see long term benefit from the Covid-19 pandemic as the digital transformation of the economy is accelerated.

Large cap technology giants Amazon, Microsoft and Google-owner Alphabet are all seeing the portion of their revenues generated by their public cloud computing platforms growing quickly. And more intrepid investors ready and able to conduct their own due diligence may find smaller gems in this space.

Stock screens are only ever a starting point for success but specialists in cloud technology and digital commerce services are prominent, so there are some interesting ideas (especially in Aim-listed companies) emerging for investors prepared to do the full due diligence.