FTSE 100 and stock markets bounce back from Black Friday massacre

After suffering its heaviest fall in over a year on Friday when it shed 3.64% as shockwaves ran through markets on news of a new, potentially more dangerous, coronavirus variant had been detected, the FTSE 100 has bounced back today with a gain of 1.25%. The more domestically focused FTSE 250 is up 1.05%. After a fretful couple of days, hopes are rising the new Omicron variant believed to have mutated in southern Africa may turn out to be relatively mild.

The new mutation is believed to be more transmissible than even the Delta variant, which has risen to dominance across most of the world in recent months. And multiple mutations to the ‘spike’ proteins which are used to latch onto cells being invaded are also causing concern the new variant will better escape immunity built up in the vaccinated and already infected. But early evidence also now suggests the new variant may cause milder symptoms than previous incarnations. 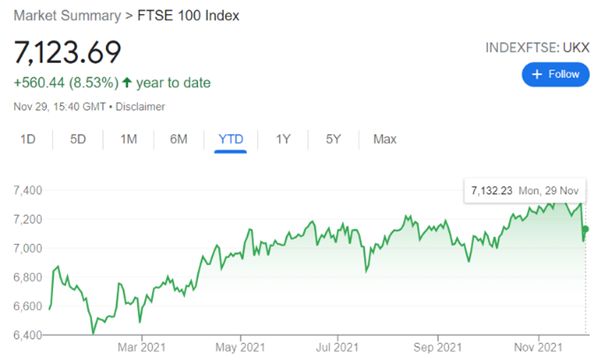 If that proves to be the case, and Omicron supplants Delta, the hope would be the virus is mutating into versions less harmful to human health in an evolutionary effort to survive. Scientists have theorised that was a likely development at some point and would see Covid-19 gradually become just another of the many seasonal viruses that circulate endemically among human populations without causing significant disruption.

“While it is too early to have definitive data, early reported data suggest that the Omicron virus causes ‘mild to moderate’ symptoms (less severity) and is more transmissible. If this turns out to be true, this is bullish not bearish for markets.”

While the World Health Organisation has said that understanding the level of severity of the variant “will take days to several weeks”, and pharmaceutical companies are already working on updates to vaccines to combat the new strain, the initial panic felt on Friday has eased.

Asian markets, which suffered milder falls than those in Europe on Friday, were still down this morning. The biggest slide was felt by Japan’s Nikkei index which lost 1.63% after the country’s government moved to stop foreigners entering the country in an attempt to slow the arrival of the new variant. Elsewhere in Asia major indices were relatively flat.

In Europe, there were early gains for most of the major indices with Germany’s DAX 40 up 0.8% in early trading and France’s CAC 30 rising 1.26%. However, a late afternoon fall has seen the DAX finish the session flat and the CAC’s return drop to just 0.35%. Futures suggest Wall Street will open to modest gains after the worst Black Friday trading session on record saw the Dow Jones lose 2.5%.