The FTSE 100 yesterday extended its recent losses with a drop of 2.15% as global equities suffered a bruising Monday that continued into Asia’s trading session this morning. A new rise in cases of Covid-19 across the world and worries over inflation and the withdrawal of economic stimulus by central banks saw the MSCI World index of stocks from 23 countries fall for the fifth session in a row. 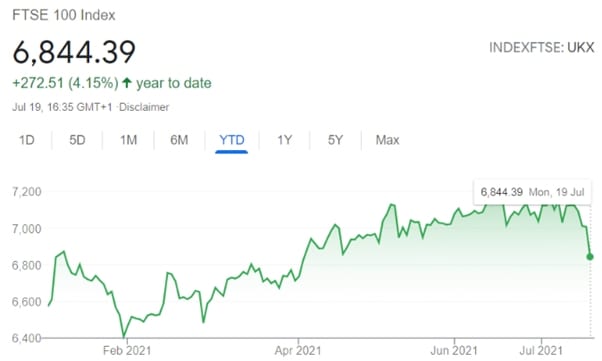 Falls for five consecutive trading sessions marks the longest losing run for the benchmark index of global stocks since February last year as the coronavirus pandemic first struck. Most of the year=to-date has been marked by growing optimism in equities markets as vaccination programmes rolled out across much of the developed world. However, the recent new surge in cases has raised fears there may yet be further bumps in the road before economies and lives can get back to something approaching pre-pandemic norms.

“Investors are worried that a fresh outbreak could potentially hinder the pace of economic reopening. The next one to two months will be an important litmus test of governments’ strategy in normalising lives and economic activities amid the threat of the pandemic.”

Yesterday should have been one of optimism in London as the July 19 “freedom day” when most remaining lockdown restrictions came to an end finally arrived. But the mood has been compromised by rocketing numbers of individuals being told to self-isolate by the NHS’s contact-tracing app that ‘pings’ people who have been in contact with someone who has subsequently tested positive for the virus.

Up to 50,000 people a day were being notified to self-isolate by the app last week taking the numbers forced off work to hundreds of thousands. That’s causing mayhem for businesses around the country and a number of companies including supermarkets, pub chains and Govia Thameslink, the UK’s largest rail operations, have complained they are being forced to shut down sites or reduce services due to staff shortages.

But the FTSE 100 was far from alone in its travails yesterday. The pan-European Stoxx 600 index also suffered a drop of 2.3% yesterday, its worst performance in seven months. The Paris and Frankfurt stock exchanges suffered even steeper drops of 3% each. The travel and leisure sectors have been particularly badly hit.

The sell-off spread from Europe into the Wall Street session, which saw the Dow Jones industrial average lose 2.1% to record its worst session in around 9 months. The S&P 500 suffered its worst decline since May with a 1.6% drop.

There were also declines in Asia this morning though not to the same extent. Major indices from Japan’s Topix to Australia’s ASX/S&P 200 and South Korea’s Kospi were down between 1.1% and 0.3%.

Things are, however, looking slightly more optimistic for today in Europe and the Americas, with futures showing gains of 0.5% for the FTSE 100 and S&P 500. Stewart Cook, head of European sales trading at Berenberg, comment for The Times newspaper:

“The past week has seen another period of focusing on the disparity between equity valuations and the need for central banks to react to higher inflation data.”