The FTSE 100 dropped 0.5% in early trading after this morning’s session commenced despite the pound falling to a two-year low. A weak pound typically boost’s the London Stock Exchange’s benchmark index because many of its constituents are international corporations that earn a majority of their revenues in other currencies. That boosts revenues and profits reported in pound sterling, as well as making exports more competitive.

But this time other economic headwinds have outweighed a slide in the pound’s value against other major international currencies that would normally be expected to lead to gains for the FTSE 100. While the pound fell 2.3% against the dollar yesterday, the Bank of England (BoE) was cutting its forecasts for UK growth and lifting interest rates by 25 basis points to 1%. 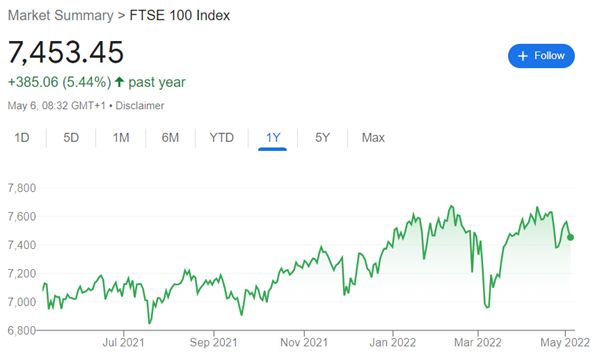 A rise in interest rates would also normally be expected to bolster the pound but the Federal Reserve had also just hiked the base rate in the USA by a whole 0.5% for the first time in over twenty years. The BoE also warned of a significant economic slowdown expected as the year continues which has led to investors questioning how much more the central bank will raise rates. Markets have priced in the chances of the Fed hiking rates by another 0.75% in June at 75%.

The biggest blow to the pound and investor sentiment, reflected in the FTSE 100 this morning, was the BoE announcing expectations that UK growth will drop by about 1% in the fourth quarter and remain flat over most of 2023 and 2024. A quickly slowing economy could well reduce the pace of monetary policy tightening.

The BoE has also chosen to delay the start of the sale of trillions of bonds it purchased over recent quantitative easing programmes. The sale now won’t commence until at least September.

UK inflation is now forecast by the bank to peak at a little over 10%, most influenced by the higher energy bills that households will face from October. That’s expected to have the knock-on effect of shrinking the economy by 0.25% next year as consumer spending power falls, which would constitute a recession. For now, 0.25% growth is expected in 2024.

However, not everyone was as pessimistic as the Bank of England. Quoted in The Times newspaper, Martin Beck, chief economic adviser at the EY Item Club explained why he felt the bank’s economic forecast was overly gloomy:

“The economy is unlikely to perform as poorly as the MPC expects. The monetary policy committee’s projections are conditioned on market expectations for interest rates which look too aggressive.”

“The recent fall in wholesale gas prices and the likelihood of more government support to households in this autumn’s budget point to a smaller rise in energy bills later this year than expected, keeping inflation from reaching the double-digit rate expected by the MPC.”

Most economists believe inflation will drop back sharply in 2024 as a result of stabilising energy prices and return to 2.1% before falling further to just 1.3% in 2025, below the BoE target for 2%.