The FTSE 100 lost 1% yesterday in its worst trading session in over 3 weeks as global stock markets trembled at the prospect of new lockdown measures being introduced around the world. A handful of countries including the Netherlands and Ireland have already announced tighter social distancing rules in the run-up to Christmas and in the USA President Biden is due to outline America’s position today. In the Netherlands, the government went straight to a full lockdown over the weekend. 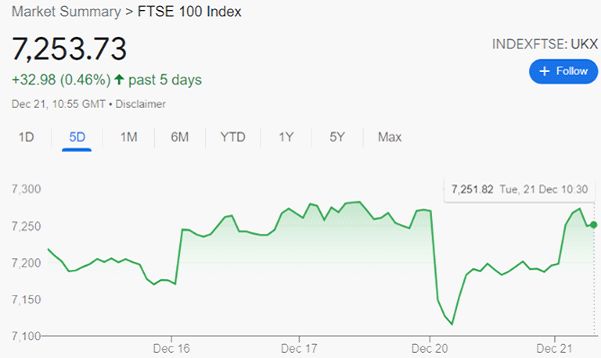 Here in the UK new rules before Christmas now seem unlikely but that could mean tighter restrictions being brought in over the days that follow. Germany, France, Denmark and Norway have introduced new travel rules in the hope of slowing down the speed of the Omicron variant’s arrival.

The more domestically focused FTSE 250 mirrored its large-cap big brother the FTSE 100 to also shed 1% yesterday. There were similar losses around Europe and on Wall Street later in the day the S&P 500 also fell by 1.1% and the Dow Jones by 1.2%.

Market fears over the potential impact of the Omicron variant were not the only worry yesterday with investors also concerned over the prospects of the White House in its attempts to push through President Biden’s $2 trillion spending plan. That was thrown into fresh doubt over the weekend by a statement made by Joe Manchin, a Democratic senator for West Virginia who said would not vote for the Build Back Better bill.

That saw Goldman Sachs downgrade its forecast for US economic growth over the first quarter of 2022 to 2% from 3% and from 3.5% to 3% for the second quarter.

Markets have, however, bounced back to a level of positivity today with the FTSE 100 clawing back 0.8% this morning to recover the majority of yesterday’s losses. Fresh data suggesting the new Omicron variant of the Covid-19 virus may indeed be less likely to result in severe illness, hospitalisation and death have raised optimism that, at least in the long term, the development could prove a positive one.

Travel stocks have been among those to benefit the most today with the EasyJet share price up 3.5% and British Airways-owner IAG Group and Wizz Air gaining 2.3% and 2.85% respectively. The share price of pubs group JD Wetherspoon has also risen by 3% today.