International stock markets including the London Stock Exchange have dropped sharply this morning on fears over the potential impact of a new Covid-19 variant that has appeared in South Africa. Early evidence suggests it is the fastest-spreading coronavirus yet and exceeds even the now dominant Delta variant’s infectiousness. The FTSE 100 has lost 2.75% in morning trading.

Other major European indices suffered even more severe sell-offs with France’s CAC 40 down 3.8% in early trading and Spain’s Ibex index suffering a 3.3% fall. The broad-based Euro Stoxx 600 has shed 2.2% to fall to a five-week low. 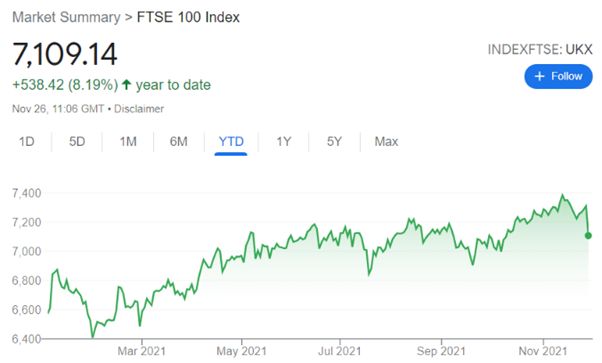 Before European markets opened Asia’s stock markets had suffered from their worst session in three months. The MSCI index covering Asian markets fell by as much as 2% at one point, its biggest loss since August and in Tokyo the Nikkei closed to a drop of 2.5%.

Wall Street exchanges were closed yesterday for the Thanksgiving holiday and will only operate until lunchtime today but futures trading shows the Dow Jones is expected to open down 1% on Wednesday’s close.

Predictably, travel, leisure and hospitality stocks have been hit hardest. London-listed hotels groups InterContinental Hotels Group and Premier Inn-owner Whitbread are down 5.6% and 5.4% respectively and had lost over 7% each at one point this morning. Primark owner Associated British Foods is down 4% and energy giants Shell and BP have shed a little under 5% and 6% of their valuations respectively.

The biggest fallers are, however, again airline stocks which have taken a battering over the past couple of years. British Airways-owner IAG has seen its value plunge by over 13% so far today and EasyJet has shed 11%.

Banking and finance stocks have also taken a hit with the Lloyds Banking Group share price down 5.45% and Standard Chartered also down by a similar amount. Barclays has fallen by 4%.

Stocks that were considered ‘pandemic winners’ like the online groceries delivery and warehouse technology company Ocado have, on the other hand, seen gains. Ocado is up 2.7% today. Assets considered safe havens like high-quality bonds, the yen, dollar and gold have also all seen gains today.

The new virus variant causing panic is the B.1.1.529 variant that has been dubbed ‘Nu’. It shows several mutations which could mean it has the potential to escape immunity built up against other variants as well as transmit faster. The WHO, which has commented Nu has a “number of worrying mutations in its spike protein” is due to meet today to assess the potential risk the new variant might pose.

“At this stage it is too early to assess the potential economic consequences. Any new wave could cause serious economic damage. As one potentially mitigating factor, the world is now on high alert and has ramped up its capacity to develop, adjust and produce vaccines.”