The UK’s benchmark FTSE 100 index yesterday responded to the Christmas Brexit deal breakthrough with a 1.55% rise. The strong move up came despite an alarming escalation in the severity of the Covid-19 pandemic gripping Britain, showing the extent of relief that a deal has been struck. While there is much to still be decided regarding the UK’s future relationship with the EU, and new global trade partners, significant uncertainty has now been removed. And markets responded positively despite the concerns elsewhere. 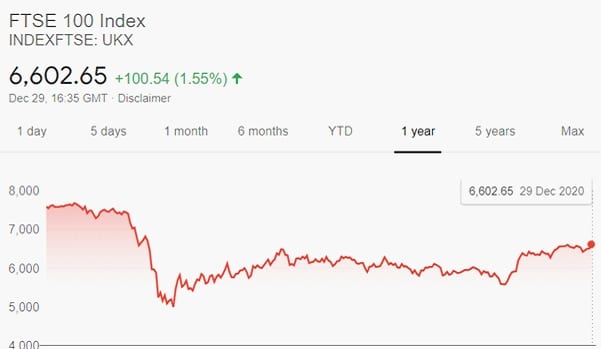 However, early this morning, the bleak news that the UK’s NHS is starting to become overwhelmed by the pandemic, gave way to new optimism that might be expected to fuel a strong end-of-year for the LSE’s main indices. The Oxford/AstraZeneca Covid-19 vaccine has been approved by UK regulators.

Much cheaper and logistically less challenging than the Pfizer vaccine approved in early December (it need only be stored at normal fridge temperatures, rather than -70C like Pfizer’s) the new vaccine will accelerate roll-out. Health minister Matt Hancock confidently stated this morning that the approval of the new, home-grown, vaccine means that life should be back to normal by late-spring.

The first day of trading since the Christmas Eve announcement a deal had been struck saw the FTSE 100 record its best day since early November, when positive news on vaccine test results was announced. That propelled the index to levels last seen in March and took gains for the quarter to 12.7%. It now looks likely that the last three months of 2020 will prove to be the benchmark index’s best quarter in at least a decade.

Many analysts believe the removal of the threat of a no deal Brexit that has been dragging on London-listed equities sets a bullish tone for 2021. Brokerage Jefferies yesterday set a 7200 point target for the index by the end of next year.

AstraZeneca, whose partnership with Oxford University is behind the new vaccine announced as approved this morning, also rose on rumours the regulatory green light was imminent. More gains can now be expected today, even though the pharma giant is treating the vaccine as a not-for-profit enterprise.

As well as the £668 billion EU deal, Britain has also signed a new continuity free trade agreement with Turkey, worth more than £18 billion and vital to maintaining key supply chains across industry.

The one negative has been the lack of a financial services deal with Brussels. That means UK banks lose their passports to access EU markets from January 1st and will now wait on an “equivalence” decision and rules. That saw the share price of the UKs big banks take a hit, with Lloyds down almost 5% and Natwest and Barclays lose around 3.5% of their value each.

The more domestically-focused FTSE 250 index also had a good day yesterday, to finish 1.7% to the good and reach its highest level since late February. The FTSE 100 is still down 12% on where it started the year but has now improved 32% from its March low. The FTSE 250 has climbed 62% from its own March low and now stands just 4.5% from where it began a troubled year.