With less than two hours to go until the end of the trading day on Friday, the FTSE 100 is set to record its worst week in over a year with a drop of nearly 6%. The London Stock Exchange’s benchmark index has been battered by investor fears over war in Ukraine. It’s over a week now since Russia invaded its neighbour and the conflict looks as though it will get worse, potentially much worse, before there is any hope of it getting better.

Markets fell sharply this morning, taking the FTSE 100 down with them, on news Russian troops had seized the Zaporizhzhya nuclear power plant in the southeast of the Ukraine. A disused reactor at the power plant, Europe’s largest nuclear facility, was also set fire to during fighting between opposing forces that involved heavy shelling, reportedly from the Russian side. 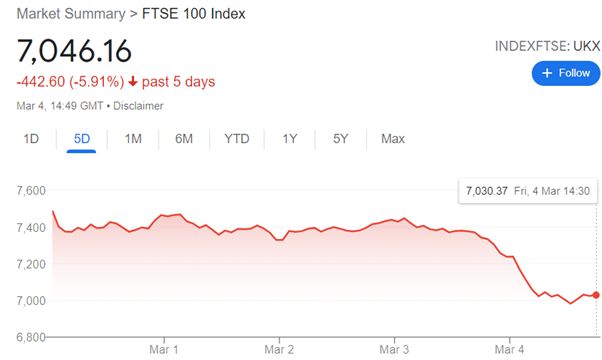 That saw the FTSE 100 down 3% this morning, following on from a heavy sell off of Asian stocks before European markets opened this morning. The large cap index is now down over 6% for the year-to-day. Germany’s benchmark DAX40 index has fared even worse, down 3.75% today and 7.5% for the week while France’s CAC40 has lost over 4% today and 7.6% over the week.

In Asia this morning the Nikkei closed down 2.2% in Tokyo while Hong Kong’s Hang Seng shed 2.5% and stock markets in mainland China, South Korea and Australia all dropped.

The financial, industrial and energy sectors have all taken a hit today with investors worried about the impact the war will have on the global economy over the months ahead and potentially much longer. Shell is down 2.3% today and BP by over 1%. The banks Lloyds, Barclays and NatWest Group have shed 3.1%, 5.5% and 3.6% respectively.

The oil price reached over $119-a-barrel for Brent crude yesterday and is currently trading at around $115. Analysts at Morgan Stanley have said a barrel of oil could reach $185 this year if the current disruption to supplies continues. Around 40% of the European Union’s natural gas imports and 25% of oil imports normally come from Russia.

And while the wide-ranging sanctions levied against the country in the last week have avoided oil and gas exports on concerns Europe will otherwise be unable to keep the lights on, Western buyers are reportedly not buying it anyway and also ignoring other commodities sold by Russia.

“You’re seeing a buyers’ strike. People do not want to be a counterparty on any transaction that includes Russian commodities.”

“Russian cargoes have become toxic for the majority of the western trading houses, refineries, utilities, shippers, banks, ports and insurers. As of today, almost 70 per cent of Russian oil is struggling to find buyers.”

European households have been encouraged to turn down the heating by the International Energy Agency, which, in a unique public statement, said that an average one-degree reduction of home temperatures across Europe would reduce the continent’s gas consumption by 10 billion cubic metres per year.