When peer-to-peer fintech lender Funding Circle was drumming up investor interest in its upcoming IPO last September, the company offered guidance that it expected revenues to grow by 50%. That was one of the pillars supporting the 440p a share offer that raised £1.5 million from investors – many of whom were retail users of Funding Circle’s platform. That was revised down to 20% earlier this week – a massive 60% reduction from the forecast 10 months earlier. 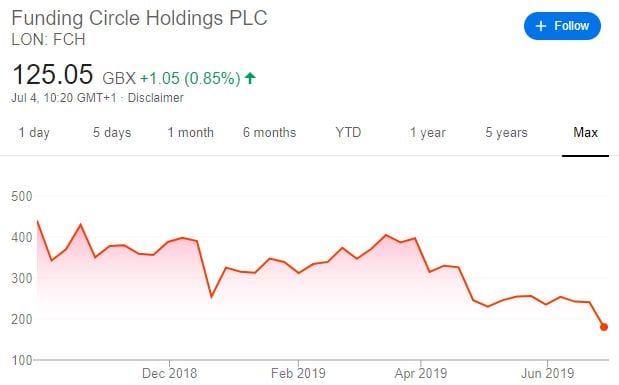 The result has been a new plunge in the Funding Circle share price to 170.8p, taking losses to almost 60% for IPO investors, mirroring the scale of the downward revision in profits growth. The scale of the reversal in fortunes is enough to take even more bearish observers by surprise. With 40% of revenues being invested in marketing to attract new lenders and borrowers, 50% growth in profits looked like it could be a conservative target designed to be beaten. Expansion into the lucrative North American markets of the USA and Canada was talked of bullishly by CEO Samir Desai, who floated the potential for the company to lend $100 billion in coming years.

Canada has since been put on hold indefinitely and the USA never really got off the ground. Funding Circle’s half year update showed on £3.5 billion of loans had been issued.

It can be argued that a large part of the downturn in lending is the result of responsible management in an environment of greater economic uncertainty. Lending to higher risk smaller businesses has been reduced. However, while it’s obviously eminently more sensible in the long run to reduce loans against a risky economic backdrop than blindly hand out money to hit growth targets, it’s difficult to argue that there weren’t already warning signs last summer when forward guidance was given. Perhaps more worryingly, there are signs default rates on loans are rising relatively quickly. In the run up to the IPO default rates were 2.5%-3.5%. After the IPO they have leapt to 3.4%-4.4%.

In mitigation, the company says that investor returns, net of defaults, have risen to an average of 8.5% per annum. However, the question is now if enough new loans can be given out over the next months and years to prevent a damaging slide in revenues. Marketing budget will need to be cut to keep the loss margin of 20%, as it was in 2018, within target. Which raises the question of how reaccelerated growth can then be achieved.

The future for Funding Circle now looks uncertain. The company makes money only on the fees it charges to facilitate loans with the interest rate going in full to investors who provide the loan capital. As a result, large loan volumes are required for Funding Circle to be able to realise a profit. Peer-to-peer lenders in the USA with loan books many times larger than Funding Circle’s have failed to turn a profit. IPO investors will be hoping Funding Circle somehow finds a way to crack the peer-to-peer sector’s profitability code.