Future Share Price Plunges By 17% On News Of GoCompare Bid

The share price of magazine publisher Future yesterday plunged by 16.7% on news of a bid for comparison sites group Goco, which owns GoCompare. The publisher of magazines including Marie Claire and PC Gamer saw its value drop by £300 million after investors reacted negatively to a £500 million cash-and-shares deal for Goco. 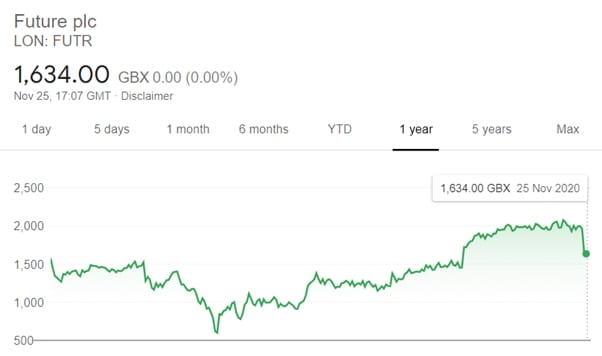 Future has forged a reputation for acquisitions but the bid for Goco would count as its largest, and most audacious, swoop to date. The move caught many City analysts by surprise and Future’s share price drop indicates some serious doubts around the value the deal would represent.

But Zillah Byng-Thorne, the Future chief executive, said she remained confident investors would be won over and eventually consider the proposed acquisition a “fantastic deal”. She continued:

“I really do think this deal should be judged on where the share price is in six months’ time and not where it is today.”

The financial pressures the Covid-19 pandemic has put many companies under has seen a spate of takeover activity involving London-listed firms over recent weeks and months. The AA yesterday decided to see itself back into private equity ownership, ending 6 difficult years as a public company. Security company G4S, the largest in the world, has been busy fighting off a hostile £3 billion offer from smaller, private-equity backed Canadian rival GardaWorld. Chemicals group Elementis has also this week turned down a £680 million bid.

Future originally valued Goco at around £594 million, 136p-a-share, but by yesterday evening the offer was worth 118.75p-a-share, or £594 million. While Future’s share price plunged yesterday, Goco’s was boosted and finished the session up 5.8%.

Goco chairman Sir Peter Wood, who owns 29.7% of the company, has given his irrevocable commitment to accepting the offer. It will see him bank £41.3 million in cash as well as a 5% stake in Future once the takeover goes through.

Future was first founded in 1985 and since Ms Byng-Thorne took over as chief executive in 2014, it has grown quickly, largely through acquisitions. After yesterday’s £300 million drop in value the publisher was worth £1.6 billion.

Goco is 24 years old and was part of the insurance group Esure, founded by Sir Peter, before being spun out as an independent company. GoCompare is its main and best know brand, with its television advertisements featuring fictional opera singer Gio Compario earning it cult status.

“We did not see Future as a likely acquirer of Goco, but on closer inspection the asset holds many similar characteristics to Future’s portfolio.”