The G4S share price has risen to its highest level since early August 2018 after the British security giant accepted a £3.8 billion takeover bid from U.S. rival Allied Universal Security Services. Pending shareholder approval, the decision brings a 3-month bidding war to a close. The deal will also see another British company come under the control of U.S.-based private equity, in the latest of a spate of deals this year. 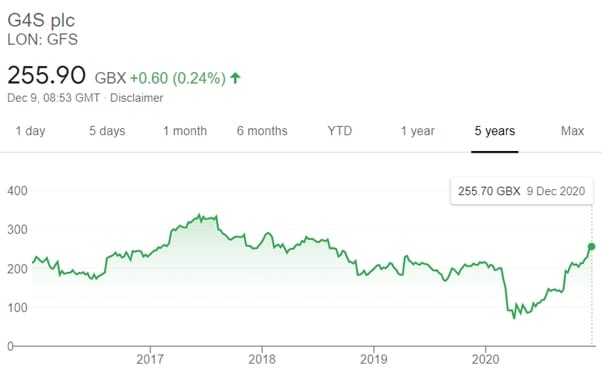 G4S is the world’s largest security contractor, normally generating annual revenues of around £7 billion, and employs more than 500,000 staff globally, but has been hit hard by the Covid-19 pandemic this year. Providing security for events, particularly big events such as concerts and spectator sports, is one of the company’s main sources of revenue, and has been decimated in recent months. That’s left it vulnerable to takeover bids by smaller but private equity-backed competitors with financial liquidity.

G4S has been fighting off a hostile takeover bid by Canadian firm Gardaworld for three months now. However, the G4S board, led by chief executive Ashley Almanza and chairman John Connolly, believes the newer bid by Allied Universal, which values the company at 245p a share, is too good to turn down and is recommending it to investors. Gardaworld’s last offer, tabled last week, was for 235p a share.

The deal on the table would see Allied inject £535 million into G4S’s deficit-running pension scheme and create a combined group which would have a 33% share of the U.S. security market, where G4S is also a major player.

U.S. private equity firm Warburg Pincus and Canadian fund CDPQ, both private equity companies, own 78% of Allied. They say they have already sounded out U.S. competition regulators over their bid and have received the green light.

The deal would be financed through a combination of unspecified cash sums provided by the private equity owners, with the rest coming from debt raised by the investment banks Morgan Stanley and Credit Suisse.

Mr Connolly said: “The G4S board . . . believes this offer represents an excellent opportunity to create a leading global security company [and] for shareholders to realise value for their investment at an attractive premium. We are therefore unanimously recommending it to our shareholders.”

Mr Almanza, described the proposed merger with Allied Universal as “unique and compelling”.

The eventual combined business would have revenues of £13.5 billion and employ 750,000. Allied had, under takeover timetable rules set by the City regulator, until this evening to make a better offer than Gardaworld’s latest bid of £3.65 billion.

A superior counterbid looks like it doesn’t come as a surprise to City traders, who have been willing to pay up to 246p for GS4 shares since Gardaworld offered 235p. The Canadian firm made its first approach at a low-ball 190p, which ruffled feathers in the G4S board, who refused to engage with the company.

However, hopes of a ‘knockout’ bid from Allied worth as much as 250p a share failed to materialise, meaning traders who were yesterday willing to pay up to 255.25p a share yesterday are left nursing paper losses today.

A Guide to Income Drawdown

Airbnb sells shares in IPO at $68, pricing above its range

Asian shares on the defensive as Covid-19 cases...

MSCI’s broadest index of Asia-Pacific shares outside Japan was barely changed at 718.72, while... END_OF_DOCUMENT_TOKEN_TO_BE_REPLACED

ECB policymakers’ hint for further negative rates and the Fed’s dovish halt was the... END_OF_DOCUMENT_TOKEN_TO_BE_REPLACED