The G4S share price leapt by over 25% yesterday after the world’s largest security contractor was subject of a hostile all-cash takeover bid by Gardaworld, a smaller Canadian competitor. The £2.96 all-cash bid values G4S at a 30% premium to the company’s closing level last week and constitutes an offer of 190p a share.

Gardaworld reportedly approached G4S three times over the course of the summer but had its interest rebuffed by the British multinational’s board on each occasion. Undeterred, the smaller rival which is owned by private equity firm BC Partners, has now decided to launch a hostile bid to test the resolve of the company’s shareholders.

Gardaworld first approached G4S in June, when its share price was just half of last week’s closing position. With much of the FTSE 100 company’s revenues derived from providing security services at public events, especially large ones such as concerts, sporting events and conferences, it has been badly impacted by the Covid-19 pandemic. Gardaworld, while smaller, is backed by BC Partners’ cash reserves and smells blood in the water.

G4S had an annual turnover of £7.7 billion in 2019 and employs 570,000 staff globally, having been created by the 2004 merger of Securicor and Group 4 Falck. The latter was itself the result of an earlier Anglo-Danish merger. In contrast, Gardaworld’s annual revenues amount to just £2.2 billion, almost 3 times less and those of G4S. The Canadian company employs 100,000.

Gardaworld’s rhetoric on announcing its hostile bid yesterday was to tell G4S investors that the company’s management had failed. G4S’s response was to label the bid a low-ball, predatory private equity offer seeking to exploit the fact the pandemic has depressed its share price. City analysts expect the bid to be the first of a series of attacks launched by cash-rich buyers targeting struggling British companies grappling with a combination of the coronavirus crisis and Brexit.

The extent of G4S’s share price leap on news of the attack yesterday, plus the fact it still closed some way short of the 190p offer, indicates investors believe the company’s board will resist the move. It further supposes a level of confidence BC Partners will not be prepared to go much higher, if at all. 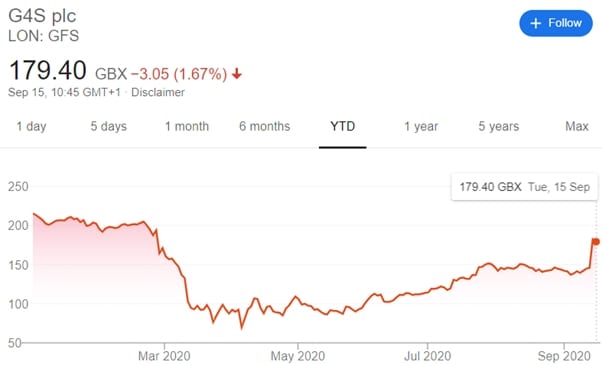 Gardaworld’s pitch to G4S investors is the management group led by chief executive Ashley Almanza has failed to deliver. The Canadian company highlighted perceived failings, with the list stretching from not being able to recruit sufficient staff for 2012 London Olympics to a recent out-of-court settlement, the bill coming in at £44 million, made to head off criminal charges over the accusation it lied to and defrauded the Ministry of Justice over offender tagging. G4S is on of the UK government’s largest contractors.

“G4S needs new, professional and experienced leadership to build a credible strategic plan which will transform G4S’s prospects and distance the business from its unhappy past.”

“Gardaworld’s attempts to engage with G4S’s board have now been summarily dismissed or ignored on three occasions. Consequently, Gardaworld now encourages G4S’s shareholders to mandate their board’s engagement in collaborative discussions.”

A further accusation was that G4S has consistently underfunded its UK pension obligations, leaving a sizeable black hole to be filled.

G4S’s board insist the 190p-a-share offer significantly undervalues what is a strong core business temporarily hit by external factors.

Quoted in The Times newspaper, markets.com chief analyst Neil Wilson believes the hostile takeover bid for G4S will be the first of several attacks on London-listed public companies this autumn:

“This is just the start of an autumn of deals. We know there is a lot of private money circling, especially relatively cheap UK equities”.

“Ahead of the pandemic, private equity was sitting on a record level of dry powder that it will deploy. We will see many more bids of this nature — foreign private money snapping up cheap, undervalued UK equities.”