The share price of Games Workshop, the company that sells miniature figurines and the fantasy role play games they are used in, has soared by 18.4% today as trading enters the late afternoon. The company’s value has been boosted after it released a trading update showing that both profits and sales are significantly up on last year. Games Workshop’s income from royalties is also “significantly ahead” of analyst forecasts. The update covered the period from the beginning of September to early November.

Sales for the six months up to the beginning of December are forecast by the company to reach at least £140 million. That figure would represent growth of 12% on performance over the same period in 2018. Profit growth is even more impressive – expected to rise by at least 35% to £55 million. 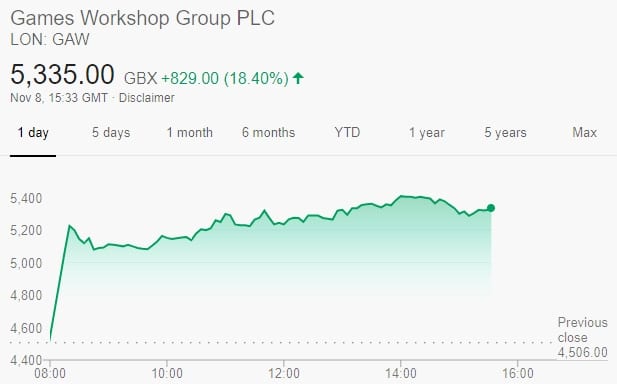 City analysts and brokers were clearly taken aback at the extent of the company’s recent success, with Peel Hunt describing trading over the first half of the year as “storming”. The broker added:

“We expect sales to have grown in all three channels – trade, retail and online – in the first half, with trade likely to be the strongest given the expected continued increase in new trade accounts.”

“The company has also had a very strong performance in royalty income, both in terms of guarantees from signing new agreements and contribution from existing games.”

Peel Hunt has been encouraged to up its target price for Games Workshop shares to 5000p and its forecast by 9%. AJ Bell investment director Russ Mould was equally enthusiastic, commenting that the company’s focused niche was protecting it from the wider high street retail downturn.

“Its customers are fanatical, loyal and part of a vibrant community whose hobby is centred on miniature figures,” he said.

“Games Workshop is currently enjoying a sweet spot whereby it is offering products which appeal to its end-market and in an engaging way. The community spirit of its offering, particularly the way staff interacts with customers in-store, gives it an edge over mainstream retailers.”

He also believes that the company’s future earnings potential could quite possibly outstrip expectations as the company expands into the large markets of Germany and the USA. Games Workshop already now has more retail outlets on mainland Europe and the USA than it does in the UK.

While most still caveat the argument with the get-out clause it is far from... END_OF_DOCUMENT_TOKEN_TO_BE_REPLACED

Natural gas prices have rocketed with Russia accused of managing supply to drive up... END_OF_DOCUMENT_TOKEN_TO_BE_REPLACED

After their valuations boomed in 2020, the UK’s online fast-fashion giants of Asos and... END_OF_DOCUMENT_TOKEN_TO_BE_REPLACED

The dust has almost settled on the months-long takeover battle between U.S.-based private equity... END_OF_DOCUMENT_TOKEN_TO_BE_REPLACED