Games Workshop, the London-listed maker and retailer of fantasy figurines and RPG (role-playing games) board games, has announced it is to lift its dividend by 50-a-share thanks to a bumper year for profits. The latest hike will take the total dividend for the year to 235p-a-share – a significant increase on the 145p paid out for the previous year.

The increased dividend is justified by full-year profits expected to hit £150 compared to £89 million the previous year. The company will also divide £12 million in bonuses between staff, which will come in the form of £5000 in shares for every employee in recognition of their contribution to an impressive year of growth.

£2 million in shares were awarded to employees the previous year, representing a £10 million increase. The share bonus will be paid out at the end of the month. The company’s statement said the decision had been made “in recognition of our staff’s contribution to these results”.

While still to be finalised, sales revenue for the year is expected to come in at “not less than” £350 million, which represents 30% growth on the previous year. The company has proven to be a “lockdown winner” with housebound fans spending more on the company’s games and figurines. It is best known for its Warhammer series of games and products.

The company was founded 44 years ago by three friends who initially made and sold wooden boardgames before it went on to secure the European rights to the popular American fantasy role-playing game Dungeons & Dragons. The first Games Workshop store opened its doors in Hammersmith in 1978.

From that west London base it has grown to 140 stores across the UK and another 391 internationally. Games Workshop now has more stores in the North America, 160, than in the UK. There are 157 in Europe, 49 in Australia and a further 25 outlets across Asia. 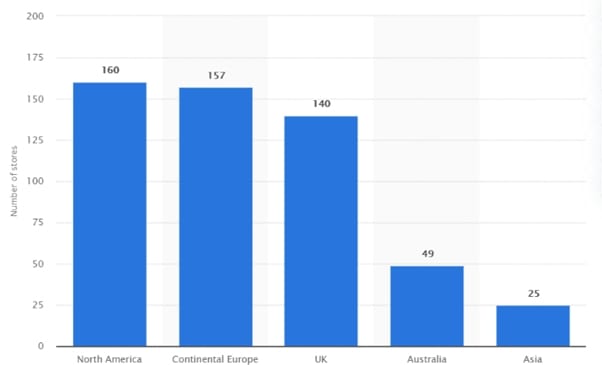 While many of its stores have been closed for periods due to lockdown restrictions, their lost sales have been more than compensated for by online shopping and wholesale contracts. Over the first half of the year online sales grew by 87.7% to £46 million and wholesale trading 33% to £104.9 million.

Investors reacted to the positive announcement by driving the Games Workshop up 2.8% yesterday. Trading has been flat this morning.