GameStop, the video games retailer that has this year found itself at the centre of an epic battle between hedge funds shorting its stock and huge coordinated crowds of small retail investors taking them on, has appointed an activist investor as its chairman. Ryan Cohen, an entrepreneur who co-founded digital pet food retailer Chewy will assume the role with a mandate to lead the predominantly bricks-and-mortar retailer towards an online future.

Just a few months ago GameStop’s prospects looked bleak. Its chain of stores selling video games and related products like controllers was already struggling and a year of on-off lockdown restrictions took a heavy toll on in-store footfall, even if the sector as a whole was boosted by people spending more time at home.

But the general boom for video game stocks did see the GameStop share price rise from under $4 in early 2020 to around $19 by the end of last year. Hedge funds felt that overvalued the predominantly bricks-and-mortar retailer and took out large short positions against it, betting on its share price falling back again.

Then the phenomenon of crowds of retail investors intentionally driving its share price up in an attempt to force the shorting hedge funds to close out their short positions at a loss took hold. Between January 18th and 29th, the crowd drove the GameStop share price from under $18 to $325. It then collapsed back down to a little over $40.50 between its late January high and February 19th before promptly setting off again to reach $264.5 by March 12th. 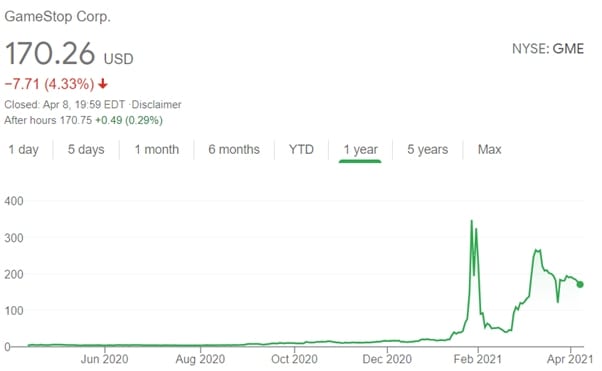 GameStop’s share price might still be well overinflated as a result of the unique battle over it but many investors do believe the company has bright prospects as an online-first video games retailer. Since the turn of the year the company has made a number of senior appointments focused on bringing in e-commerce expertise. Most of the new roles have been filled by executives with experience at Chewy or Amazon, with Cohen playing a key role in the appointments as an activist investor.

Cohen’s drive for change at the company has now resulted in him being appointed as GameStop’s new chairman. Filings made yesterday announced the intention to elect Cohen in June at its annual shareholders meeting. Incumbent Kathy Vrabeck will not be standing. New board of director nominations have also been made in the form of Volition Capital co-founder Larry Cheng and Kraft Heinz’s Yang Xu.

Earlier in the week GameStop also announced it is raising the value of a planned new sale of shares from $100 million to as much as a billion. Unaudited results released for the 9 weeks to April 4th showed sales growth of 11%.